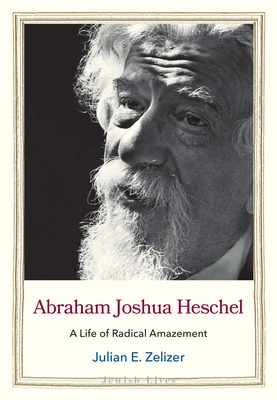 New in the acclaimed Jewish Lives series: A biography of the rabbi Abraham Joshua Heschel, who became a symbol of the marriage between religion and social justice

“Zelizer’s book is absolutely riveting, both as a study of a truly important figure within Jewish thought and in providing insight into the politics of the 1960s.”—Sandy Levinson, Balkinization

“When I marched in Selma, I felt my legs were praying.” So said Polish-born American rabbi Abraham Joshua Heschel (1907–1972) of his involvement in the 1965 Selma civil rights march alongside Martin Luther King Jr. Heschel, who spoke with a fiery moralistic fervor, dedicated his career to the struggle to improve the human condition through faith. In this new biography, author Julian Zelizer tracks Heschel’s early years and foundational influences—his childhood in Warsaw and early education in Hasidism, his studies in late 1920s and early 1930s Berlin, and the fortuitous opportunity, which brought him to the United States and saved him from the Holocaust, to teach at Hebrew Union College and the Jewish Theological Seminary. This deep and complex portrait places Heschel at the crucial intersection between religion and progressive politics in mid-twentieth-century America. To this day Heschel remains a symbol of the fight to make progressive Jewish values relevant in the secular world.

“Zelizer’s book is absolutely riveting, both as a study of a truly important figure within Jewish thought and in providing insight into the politics of the 1960s.”—Sandy Levinson, Balkinization

“As Julian E. Zelizer has so vividly demonstrated in his new biography, . . . both Heschel’s scholarship and his politics have endured, and he has had a lasting impact on the American Jewish community and the world.”—Michael Berenbaum, Jewish Journal

“Zelizer covers the life and career of Heschel thoroughly and elegantly. This book will find an enthusiastic and appreciative public.”—Rabbi David Wolpe, Sinai Temple

“Julian Zelizer's Abraham Joshua Heschel transcends time and place. The life of Heschel moves seamlessly from inside the Jewish world to exhilarating movements of the 1960s and the quest for peace and justice. Zelizer shows how Heschel's words, thoughts, and actions resonate to this day.”— Hasia Diner, author of Julius Rosenwald: Repairing the World

Julian E. Zelizer is a professor of history and public affairs at Princeton University. He is the author of numerous books, and has written for CNN.com, the New York Times, and the Washington Post.
Loading...
or support indie stores by buying on