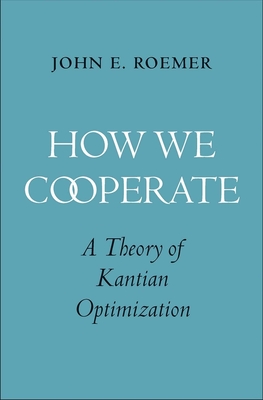 A Theory of Kantian Optimization

A new theory of how and why we cooperate, drawing from economics, political theory, and philosophy to challenge the conventional wisdom of game theory

Game theory explains competitive behavior by working from the premise that people are self-interested. People don’t just compete, however; they also cooperate. John Roemer argues that attempts by orthodox game theorists to account for cooperation leave much to be desired. Unlike competing players, cooperating players take those actions that they would like others to take—which Roemer calls “Kantian optimization.” Through rigorous reasoning and modeling, Roemer demonstrates a simpler theory of cooperative behavior than the standard model provides.


Praise For How We Cooperate: A Theory of Kantian Optimization…

“An important and original contribution. . . . Combined with the insight that altruism can be replaced by solidarity as a basis of cooperation, this work promotes a currently underrepresented angle on cooperation. It will be useful to those interested in economy, sociology, philosophy, and more generally to anyone interested in how we work together, and why it may not be irrational to do so.”—Martina Valković, Marx & Philosophy Review of Books

"John Roemer proves in this book that one can still write an original and innovative book using formal models and yet focus on really essential economic ideas."—Ariel Rubinstein, Tel Aviv University and New York University

"In this striking book, Roemer expands on his earlier idea of Kantian reasoning to provide a new and different view of social preferences that is well illustrated by examples and applications."—David K. Levine, European University Institute and Washington University in St. Louis

"This rigorous and provocative book takes cooperation out of the kaleidoscopic picture offered by social sciences and explains it in a unitary framework based on a novel and intriguing optimization concept."—Giacomo Corneo, author of Is Capitalism Obsolete?

"John Roemer develops Kant’s categorical imperative into a novel solution concept for games and shows how it underpins cooperative behavior in concrete situations.  A highly original take on a central problem in social science."—H. Peyton Young, University of Oxford and London School of Economics

"In this seminal contribution, John Roemer invites us to an exciting exploration of the uncharted implications of a Kantian perspective on cooperation.  It is well worth it."—Andreu Mas-Colell, Universitat Pompeu-Fabra

John E. Roemer is the Elizabeth S. and A. Varick Stout Professor of Political Science and Economics at Yale University. He is the author of several books, including Sustainability for a Warmer Planet; Democracy, Education, and Equality;Political Competition: Theory and Applications; and Equality of Opportunity.
Loading...
or support indie stores by buying on