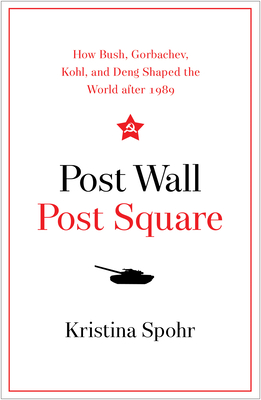 How Bush, Gorbachev, Kohl, and Deng Shaped the World after 1989

This book offers a bold new interpretation of the revolutions of 1989, showing how a new world order was forged—without major conflict. Based on extensive archival research, Kristina Spohr attributes this in large measure to determined diplomacy by a handful of international leaders, who engaged in tough but cooperative negotiation to reinvent the institutions of the Cold War. She offers a major reappraisal of George H. W. Bush and innovative assessments of Mikhail Gorbachev and Helmut Kohl, as well as Margaret Thatcher and François Mitterrand. But, she argues, Europe’s transformation must be understood in global context. By contrasting events in Berlin and Moscow with the brutal suppression of the pro-democracy movement in Beijing, the book reveals how Deng Xiaoping pushed through China’s very different Communist reinvention. Here is an authoritative yet highly readable exploration of the crucial hinge years of 1989–1992 and their consequences for today’s world.

Kristina Spohr is the Helmut Schmidt Distinguished Professor at the Henry A. Kissinger Center for Global Affairs of Johns Hopkins University in Washington DC. She has authored and edited several books, most recently The Global Chancellor.

“A gripping and compelling account…. The peaceful ending of the Cold War between West and East remains one of the greatest achievements of modern statecraft.”—Christopher Andrew, Literary Review
“Here Spohr finally brings her knowledge together in a masterly, broad narrative international history of this pivotal time in world history.  It is political and diplomatic history in a grand style, done with nice balance, empathy, and an eye for telling detail.  It will be one of the standard works on this period for many years to come.”— Philip Zelikow, co-author of To Build a Better World
“Kristina Spohr beautifully reconstructs the events of the 1989-92 era, reminding us of the importance of intelligent, responsible political leadership at critical moments of history . . . Uses recently declassified material in the British, French, German, Russian and US archives … [and] pays deserved tribute also to the “people power” of central and eastern Europe. She mentions not only those who filled the streets of East Berlin and Prague in peaceful demonstrations, but also brave individuals such as Lech Walesa, the earthy, politically astute electrician from Gdansk, who symbolised Poland’s non-violent move to democracy.” —Financial Times
“Post Wall, Post Square is a work of historical sweep and ambition . . . a magisterial account of the momentous events of 1989 and the diplomacy that put in place a new global settlement.”—The Times Literary Supplement