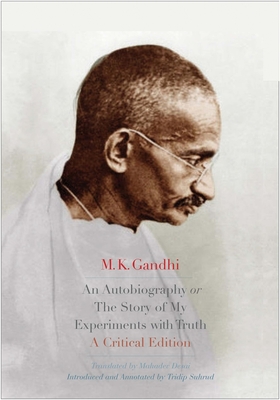 An Autobiography or The Story of My Experiments with Truth (Hardcover)

In the mid-1920s, prompted by a “small, still voice” that encouraged him to lay bare what was known only to him and his God, M. K. Gandhi began writing and publishing his autobiography. Drafted during a period of intensive fasting and “in-dwelling” at his ashram in Ahmedabad, his story of the soul portrayed the deeper, more inward experiences that made him externally an innovator in the struggles against violence, racism, and colonialism. The book, written in Gujarati and translated into English by Mahadev Desai, would become an international classic, hailed as one of the “100 Best Spiritual Books of the 20th Century.”

This first critical edition of this seminal work by leading Gandhi scholar Tridip Suhrud offers an unprecedented window into the original Gujarati text. Including both alternative English translations and illuminating notes, as well as a deeply researched introduction, it will bring renewed critical attention to one of the world’s most widely read books.

Tridip Suhrud works on the life and thought of Gandhi and the intellectual history of Gujarati. He is professor and director of archives at CEPT University, Ahmedabad. Suhrud has translated a four-part biography of Gandhi, My Life Is My Message. He is currently working on an eight-volume compendium of peasant testimonies of indigo cultivators of Champaran.

Praise For An Autobiography or The Story of My Experiments with Truth: A Critical Edition…

“Tridip Suhrud’s work has been part of [a] new interest in Gandhi, and has made much of it possible. . . . His editorial work constitutes an act of intellectual generosity . . . Gandhi’s autobiography audaciously seeks to tell the story of truth’s experiments with the self it both sustains and destroys.”—Faisal Devji, Los Angeles Review of Books
Winner of the Outstanding Academic Title for 2018 award sponsored by Choice
“Gandhi’s autobiography is probably the most important book ever published in India. Tridip Suhrud’s annotated version is a colossal contribution to Gandhi scholarship; as well as a vital aid to all readers. This edition will be read and discussed for generations to come.”—Ramachandra Guha, author of Gandhi Before India
“This pioneering critical edition subtly and invaluably expands our understanding of one of Gandhi's key texts - and our sense of the man himself.”—Sunil Khilnani, author of The Idea of India
“Gandhi’s 'autobiography' is a seminal work for understanding Gandhi’s vision and work, and is a classic 20th century spiritual and political text. This critical edition is a most welcome addition to serious Gandhi scholarship.”—Judith M. Brown, University of Oxford
“An autobiography by one of the twentieth century's most remarkable figures, this hugely influential book continues to be read widely around the world. This first critical edition allows us to understand the context and concerns that animated Gandhi's writing as never before.”—Faisal Devji, author of The Impossible Indian: Gandhi and the Temptation of Violence
"Gandhi's inimitably limpid autobiography tells us how the Ashram, politically meaningful spinning, zest for Truth, and fasting to expiate others' impurity are interconnected. This text is now introduced by Tridip Suhrud, arguably the finest interpreter and archivist of M.K.G's writings now. Suhrud teaches us how to read Gandhi, who in turn, through his life-writing, teaches us how to seek the Self's Truth instead of self-seeking.”—Arindam Chakrabarti, University of Hawai'i at Mānoa