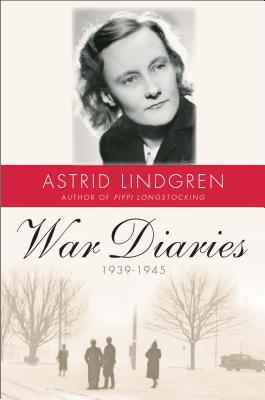 Before she became internationally known for her Pippi Longstocking books, Astrid Lindgren was an aspiring author living in Stockholm with her family at the outbreak of the Second World War. The diaries she kept throughout the hostilities offer a civilian's, a mother's, and an aspiring writer’s unique account of the devastating conflict. She emerges as a morally courageous critic of violence and war, as well as a deeply sensitive and astute observer of world affairs. We hear her thoughts about rationing, blackouts, the Soviet invasion of Finland, and the nature of evil, as well as of her personal heartbreaks, financial struggles, and trials as a mother and writer.

Posthumously published in Sweden to great international acclaim, these diaries were called in the Swedish press an “unparalleled war narrative,” “unprecedented.” and a “shocking history lesson.” Illustrated with family photographs, newspaper clippings, and facsimile pages, Lindgren’s diaries provide an intensely personal and vivid account of Europe during the war.

"'Laden with sadness and dismay,' the diaries show everything from Lindgren’s horror at the deportation of 1,000 Norwegian Jews to Poland—'it is diabolical!'—to her personal heartbreak after a marriage crisis."—Guardian

"As a writer, Lindgren was no navel-gazer given to mooning about her feelings, nor as a civilian was she proximate to powerful people pulling the levers of history. She was, however, a vivid observer of domestic affairs and geopolitics who, as her books for children would prove, was keenly alive to life’s vagaries. . . . Sensitive and wide-ranging, the diaries of the future author of the 'Pippi Longstocking' books offer a rare Scandinavian perspective on the catastrophe. . . . Fresh and intelligent."—Meghan Cox Gurdon, Wall Street Journal

“A compelling and well-researched narrative full of passion and a constant yearning for peace and change. Lindgren’s diary is detailed, informative, and incredibly engaging.”—Library Journal (starred review)

"A bystander’s unillusioned record of a war-ravaged, refugee-strewn world resonates these days. And Lindgren’s bracing testimony sheds unexpected light on outlandish Pippi after all. . . . As a child born of a war-haunted imagination, Pippi and her zany gumption make perfect sense."—Ann Hulbert, The Atlantic

"The newly published 1939-1945 diaries of the globally acclaimed children’s book author offer fresh insights into war-time Sweden and into the life of the not-yet-famous Astrid Lindgren."—Radio Sweden

"This is a breath-taking read."—Barbara Möller, Die Welt

"This is a fascinating, engrossing, and wholly unique account of a young writer’s attempts to make sense of World War II, from the local concerns of food rationing and the well-being of her children to the larger theatre of war unfolding in Europe, Africa, and Asia."—Morten Høi Jensen

Astrid Lindgren (1907–2002) was a Swedish writer best known for her Pippi Longstocking series. Her books have been translated into 97 languages and have sold approximately 150,000,000 copies worldwide.
Loading...
or support indie stores by buying on
(This book is on backorder)