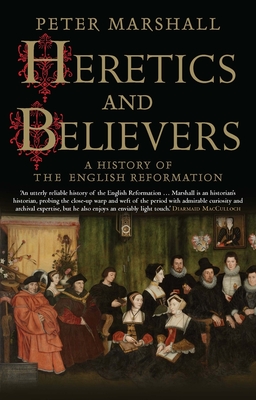 A History of the English Reformation

WINNER OF THE 2018 WOLFSON HISTORY PRIZE

Centuries on, what the Reformation was and what it accomplished remain deeply contentious. Peter Marshall’s sweeping new history—the first major overview for general readers in a generation—argues that sixteenth-century England was a society neither desperate for nor allergic to change, but one open to ideas of “reform” in various competing guises. King Henry VIII wanted an orderly, uniform Reformation, but his actions opened a Pandora’s Box from which pluralism and diversity flowed and rooted themselves in English life.

With sensitivity to individual experience as well as masterfully synthesizing historical and institutional developments, Marshall frames the perceptions and actions of people great and small, from monarchs and bishops to ordinary families and ecclesiastics, against a backdrop of profound change that altered the meanings of “religion” itself. This engaging history reveals what was really at stake in the overthrow of Catholic culture and the reshaping of the English Church.

Peter Marshall is professor of history at the University of Warwick, winner of the Harold J. Grimm Prize for Reformation History, and author of numerous books, including The Reformation: A Very Short Introduction. His book Heretics and Believers: A History of the English Reformation was the winner of the 2018 Wolfson History Prize. He lives in Leamington Spa, UK.

Praise For Heretics and Believers: A History of the English Reformation…

"Peter Marshall has written a fine history of a momentous time as seen from the bottom up, drawing on a wide range of primary sources and his evident scholarship . . . a riveting account of the losers as well, the English zealots and cynics who wanted a better world, or an unchanging one."—Economist
"An eminently readable narrative that avoids flattening out irregularities in the story. . . . Marshall’s analysis, his control of documentary material and his imaginative maneuvers between the corridors of power and the streets and alehouses is impressive."—Malcolm Gaskill, Financial Times
“A balanced and judicious account of the English Reformation.”—Arnold Hunt, TLS
WINNER OF THE WOLFSON HISTORY PRIZE 2018
“A beautifully judged account of the English Reformation. Marshall weaves a single narrative through a contentious century without loss of detail or depth of understanding. Full of wise and humane analysis, this is ambitious in scope and brilliant in execution.”
—Wolfson Prize Judges

“A tour de force . . . readable, detailed, insightful, and creative . . . Marshall has delivered a volume that is intellectually solid, extraordinarily well researched, easily accessible, and enjoyably rewarding.”—J. Patrick Hornbeck II, Journal of the American Academy of Religion
“A profound book with a light touch—and all the more impressive in that the author is covering almost a century of intellectual, social, and religious history. . . . It will be a long time before the book is surpassed.”—Michael Coren, Globe and Mail

"Magisterial. . . . It is a significant achievement, notable not only for its depth and breadth but also for its sheer liveliness and flair, as Marshall masterfully guides his reader through this period of profound cultural change and transformation."—B. Shannon Gayk, Reading Religion

“Marshall has a gift . . . in his hands, history is good storytelling. . . . An important book offering a creative synthesis of decades of fruitful scholarship.”—Anne T. Thayer, Journal of British Studies
"Marshall’s book is a brilliant work of scholarship. Beautifully written, vigorously argued, deeply researched, and brimming with insight, wit, and empathy, this book is a seminal contribution to the religious history of early modern Europe."—Stefania Tutino, American Historical Review
"A masterpiece. . . . Marshall's book is a gem, the foremost study for decades to come."—Donald K. McKim, Church History
"A superb narrative history . . . this will become a standard text for those who teach the English Reformation."—Norman Jones, Renaissance Quarterly
“A smart, sweeping account of a century of English religious reformations. . . . A pleasure to read.”—Janice Liedl, Renaissance and Reformation
"[Marshall's] book has shown in a realistic manner, grounded in story and detail, how and why the Reformation produced 'deep and lasting divisions in religion.' Heretics and Believers is certainly a book to be read and absorbed."—Rudolph P. Almasy, Sixteenth Century Journal
Peter Marshall has won The Wolfson History Prize 2018 for Heretics and Believers: A History of the English Reformation.
“In a field crowded with exceptionally able histories, Heretics and Believers stands out as a treasure.”—Mark Noll, author of Protestantism: A Very Short Introduction
"A magisterial, panoramic and compelling new account of a phenomenon that was never just a top-down, institutionalised and ordered act of state. Peter Marshall reveals how the English Reformation was nurtured within the religious beliefs, culture and polity that it profoundly transformed, and thereby recovers its momentousness."—Mark Greengrass, author of Christendom Destroyed: Europe 1517–1648
"A commanding re-interpretation of a deeply significant process of change: analytically subtle, thematically all-encompassing, and full of real people."—Steven Gunn, author of Henry VII's New Men and the Making of Tudor England
"A remarkable book that will, without doubt, become the definitive narrative of the English Reformation for years to come. Marshall writes with deep understanding and great panache, moving us masterfully beyond tired debates about whether the Reformation was 'good' or 'bad' and bringing his subject vividly to life."—Christopher Marsh, author of Popular Religion in Sixteenth-Century England