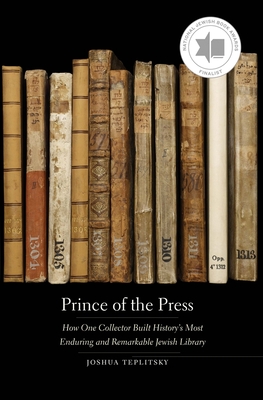 Prince of the Press

David Oppenheim (1664–1736), chief rabbi of Prague in the early eighteenth century, built an unparalleled collection of Jewish books and manuscripts, all of which have survived and are housed in the Bodleian Library at Oxford. His remarkable collection testifies to the myriad connections Jews maintained with each other across political borders, and the contacts between Christians and Jews that books facilitated. From contact with the great courts of European nobility to the poor of Jerusalem, his family ties brought him into networks of power, prestige, and opportunity that extended across Europe and the Mediterranean basin. Containing works of law and literature alongside prayer and poetry, his library served rabbinic scholars and communal leaders, introduced old books to new readers, and functioned as a unique source of personal authority that gained him fame throughout Jewish society and beyond. The story of his life and library brings together culture, commerce, and politics, all filtered through this extraordinary collection. Based on the careful reconstruction of an archive that is still visited by scholars today, Joshua Teplitsky’s book offers a window into the social life of Jewish books in early modern Europe.

Praise For Prince of the Press: How One Collector Built History’s Most Enduring and Remarkable Jewish Library…

"A fascinating story of a unique book collector, worthy of attention by scholars and lay readers alike."—Kirkus Reviews, Starred Review

"The not-at-all-public library collected by the Central European rabbi David Oppenheim (1664-1736) . . . was as invaluable to its individually approved users as the NYPL is to today’s readers. In his beautifully illustrated Prince of the Press, Joshua Teplitsky brings us deep inside that library . . . to explore the manifold ways this collection both reflected and shaped the intellectual heritage of Central European Jewry."—Rachel L. Greenblatt, Moment

"Teplitsky opens a fascinating window on a very different world. In Prince of the Press: How One Collector Built History’s Most Enduring and Remarkable Jewish Library, he tells the story of Jewish books – and the Jewish world in general – of 300 years ago."—Canadian Jewish News

In his masterful biography . . . Joshua Teplitsky presents a vivid account not only of Oppenheim but also of the social, political, and cultural history of the Jewish communities of Central Europe between the Thirty-Years War (1618-1648) and the Napoleonic Wars (1803-1815)."—Reba Carmel, Jewish Book Council

“Prince of the Press traces the history of the library of Rabbi David Oppenheim, and it splendidly explains the importance of such private collections in times when mass production of books had not taken hold."—JWeekly

"Teplitsky’s knowledgeable monograph certainly in many ways goes far beyond the genre of biography and historical writing about libraries–for it regards Oppenheim in the broader context of early modern Jewish history and of book culture, which is very inspiring."—Andrea Jelinková, Judaica Bohemiae

Winner of the 2019 Salo Wittmayer Baron Prize, sponsored by the American Academy for Jewish Research

Winner of the Jordan Schnitzer Book Award, Modern Jewish History and Culture category, sponsored by the Association for Jewish Studies

“David Oppenheim was a great rabbi and a greater information master. This riveting book shows how he built a treasury of Jewish learning and life—and used it, working with both scribes and printers, to underpin his reputation and authority.”—Anthony Grafton, Princeton University

“Teplitsky’s masterful, learned, and beautifully written guide to a dazzling empire of books provides an intellectual feast for historians and an indispensable treasure for book lovers of all kinds.”—Elisheva Carlebach, Columbia University

“In this innovative and groundbreaking book, Joshua Teplitsky uses his unparalleled familiarity with the Oppenheim collection--whose story and significance has remained untold--to open up a world of power and politics in the Jewish communities of Central Europe. This will be an important book that will be read and enjoyed for years to come.”—Debra Kaplan, Bar-Ilan University

“Joshua Teplitsky vividly presents the story of David Oppenheim through the lens of his famous book collection. This is an important, elegant book about the value and power of libraries in politics and culture.”—Magda Teter, Fordham University

“Teplitsky’s biography of David Oppenheim combines the newest insights in Jewish intellectual and book history with an exciting and innovative interpretation of all relevant primary sources. Prince of the Press is a great achievement in the modern study of the Jewish book.”—Emile Schrijver, Jewish Cultural Quarter

Joshua Teplitsky is assistant professor of history at Stony Brook University. He specializes in the history of the Jews in Europe in the early modern period and in the study of books and media. He lives in New York City.
Loading...
or
Not Currently Available for Direct Purchase