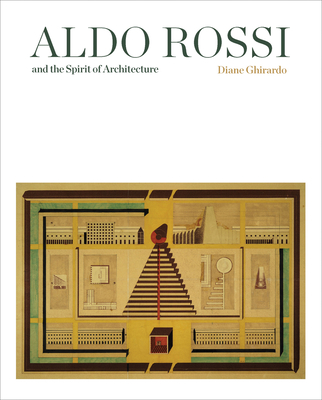 Aldo Rossi and the Spirit of Architecture (Hardcover)

An essential new look at the Italian architect, writer, and designer whose work paved the way for the postmodern movement

This crucial reassessment of Aldo Rossi’s (1931–1997) architecture simultaneously examines his writings, drawings, and product design, including the coffeepots and clocks he designed for the Italian firm Alessi. The first Italian to receive the Pritzker Prize, Rossi rejected modernism, seeking instead a form of architecture that could transcend the aesthetic legacy of Fascism in postwar Italy. Rossi was a visionary who did not allow contemporary trends to dominate his thinking. His baroque sensibility and poetic approach, found both in his buildings and in important texts like The Architecture of the City, inspired the critic Ada Louise Huxtable to describe him as “a poet who happens to be an architect.”

Diane Ghirardo explores different categories of structures—monuments, public buildings, cultural institutions, theaters, and cemeteries—drawing significantly on previously unpublished archival materials and always keeping Rossi’s own texts in the forefront. By delving into the relationships among Rossi’s multifaceted life, his rich body of work, and his own reflections, this book provides a critical new understanding of Rossi’s buildings and the place of architecture in postwar Italy.

Diane Y. F. Ghirardo is professor of the history and theory of architecture at the University of Southern California, Los Angeles.

Praise For Aldo Rossi and the Spirit of Architecture…

“Two core issues, both embedded in the European and particularly Italian culture, constantly emerge in the work of Aldo Rossi. Diane Ghirardo enlightens them with particular precision and clarity: the relationship with history, a part of Europeans’ own genetic heritage, and with the city, and the cities of history of which everyone is inevitably heir and continuator.”—Raffaella Neri, The Plan Journal
“A masterpiece of analysis. Ghirardo’s book not only brings Rossi’s work to life, it is itself a demonstration piece of a type of architectural history that is increasingly missed in our day and age: the art of historicizing architecture from the building outward.”—Mark Jarzombek, Massachusetts Institute of Technology
“Diane Ghirardo makes a powerful claim about Rossi’s architectural achievements and artistic identity, locating his religious perspective and baroque sensibility at the root of his originality.”—Giuseppe Mazzotta, Yale University
“Ghirardo’s book is a remarkable account of Rossi’s work as understood through a close reading of the architect’s work and writing. It also serves as an impassioned call for historians to consider architectural projects and related creative output as the primary object of study.”—Lucy M. Maulsby, Northeastern University