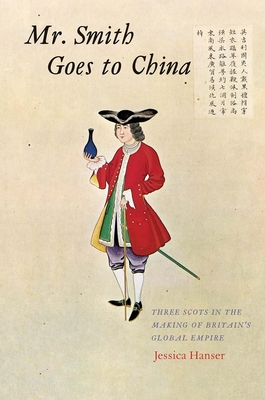 Three Scots in the Making of Britain’s Global Empire

This book delves into the lives of three Scottish private traders—George Smith of Bombay, George Smith of Canton, and George Smith of Madras—and uses them as lenses through which to explore the inner workings of Britain’s imperial expansion and global network of trade, revealing how an unstable credit system and a financial crisis ultimately led to greater British intervention in India and China.


Praise For Mr. Smith Goes to China: Three Scots in the Making of Britain’s Global Empire…

"In this impressive book, Jessica Hanser opens a fresh window on the British overseas trading world. Written with verve and filled with arresting details, the book tells the true stories of three Scots, all named George Smith, and uses their experiences to cast new light on imperialism, cross-cultural trade, and global finance in the eighteenth century. This is global microhistory at its finest."—Tonio Andrade, author of The Gunpowder Age

Jessica Hanser is assistant professor of history at the University of British Columbia. Hanser’s doctoral dissertation, on which this book is based, won Yale University’s Hans Gatzke Prize in European History.
Loading...
or
Not Currently Available for Direct Purchase