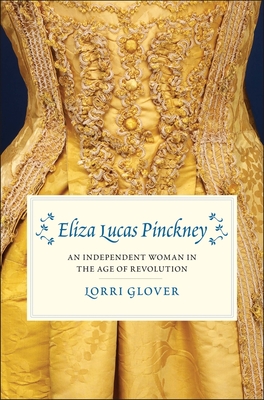 An Independent Woman in the Age of Revolution

The award-winning biography of Eliza Lucas Pinckney, an innovative, highly regarded, and successful woman plantation owner during the Revolutionary era

“Glover not only recovers the life of a remarkable eighteenth-century woman, she also issues a challenge to the gendered narrative of the Age of Revolution. Eliza Lucas Pinckney would undoubtedly approve!”—Carol Berkin, author of Revolutionary Mothers: Women in the Struggle for America’s Independence

Eliza Lucas Pinckney (1722–1793) reshaped the colonial South Carolina economy with her innovations in indigo production and became one of the wealthiest and most respected women in a world dominated by men. Born on the Caribbean island of Antigua, she spent her youth in England before settling in the American South and enriching herself through the successful management of plantations dependent on enslaved laborers. Tracing her extraordinary journey and drawing on the vast written records she left behind—including family and business letters, spiritual musings, elaborate recipes, macabre medical treatments, and astute observations about her world and herself—this engaging biography offers a rare woman’s first-person perspective into the tumultuous years leading up to and through the Revolutionary War and unsettles many common assumptions regarding the place and power of women in the eighteenth century.


Praise For Eliza Lucas Pinckney: An Independent Woman in the Age of Revolution…

Winner of the James Bradford Biography Prize, sponsored by The Society for Historians of the Early American Republic

“An insightful account of an enterprising Southern planter matriarch. Eliza Lucas Pinckney’s relations with the British Court, her family, and the enslaved people under her sway come vividly to life.”—Flora Fraser, author of The Washingtons: George and Martha

“Glover not only recovers the life of a remarkable eighteenth-century woman, she also issues a challenge to the gendered narrative of the Age of Revolution. Eliza Lucas Pinckney would undoubtedly approve!”—Carol Berkin, author of Revolutionary Mothers: Women in the Struggle for America’s Independence

“In lively prose, Lorri Glover brings all of the eighteenth-century Atlantic world to life in this intriguing biography.”—Ann M. Little, author of The Many Captivities of Esther Wheelwright

“In a stunning feat of historical biography, Lorri Glover recovers the world of Eliza Lucas Pinckney, an elite white woman whose complex life challenged the gender boundaries of her time. This long-overdue study enormously expands our understanding of both the restrictions and possibilities shaping southern women’s lives during the era of the American Revolution.”—Rosemarie Zagarri, author of Revolutionary Backlash: Women and Politics in the Early American Republic

Lorri Glover is the John Francis Bannon Endowed Chair in the Department of History at Saint Louis University. She has written extensively about early America, including Founders as Fathers: The Private Lives and Politics of the American Revolutionaries.
Loading...
or support indie stores by buying on
(This book is on backorder)