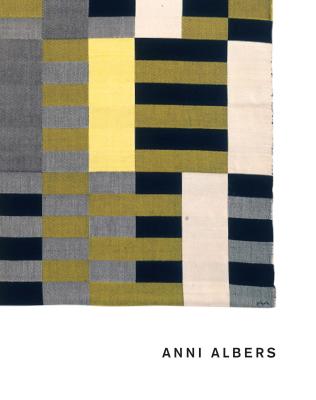 Anni Albers (1899–1994) was a German textile designer, weaver, and printmaker, and among the leading pioneers of 20th-century modernism. Although she has heavily influenced generations of artists and designers, her contribution to modernist art history has been comparatively overlooked, especially in relation to that of her husband, Josef. In this groundbreaking and beautifully illustrated volume, Albers’s most important works are examined to fully explore and redefine her contribution to 20th-century art and design and highlight her significance as an artist in her own right.

Featured works—from her early activity at the Bauhaus as well as from her time at Black Mountain College, and spanning her entire fruitful career—include wall hangings, designs for commercial use, drawings and studies, jewelry, and prints. Essays by international experts focus on key works and themes, relate aspects of Albers’s practice to her seminal texts On Designing and On Weaving, and identify broader contextual material, including examples of the Andean textiles that Albers collected and in which she found inspiration for her understanding of woven thread as a form of language. Illuminating Albers’s skill as a weaver, her material awareness, and her deep understanding of art and design, this publication celebrates an artist of enormous importance and showcases the timeless nature of her creativity.

“[A] compelling argument that Albers is a major artist whose time has come . . . The volume itself is beautifully designed and printed. The essays and, especially, the images of weavings, show Albers as a masterful technician, as well as an artist who could turn her designs into rich and tactile works.”—Adrian Higgins, Washington Post
“Obviously timely, Anni Albers not only is but feels groundbreaking.”—Lynne Cooke, Artforum
“This catalog successfully shows Anni Albers’s role in the development of 20th-century modernism . . . Thoroughly researched and with high quality images that do justice to the color and dimensionality of Albers’s weavings.”—Nancy J. Mactague, Library Journal
“A long-overdue reassessment of one of the leading pioneers of 20th-century modernism . . . Here, her most important works are examined to fully explore and redefine her significance to 20th-century art.”—Publishers Weekly (Holiday Gift Guide)
“Filled with stunning images . . . A fascinating glimpse into history, a thought-provoking narrative of the artist once dubbed a ‘reluctant weaver’ who became a fabric virtuoso.”—Alia Jeraj, American Craft
“Here [Anni Albers] finally gets the solo spotlight on her mesmerizing, modernist experiments in weaving, featuring new materials, intricate pattern, and masterful color.”—Curbed (holiday gift book selection)