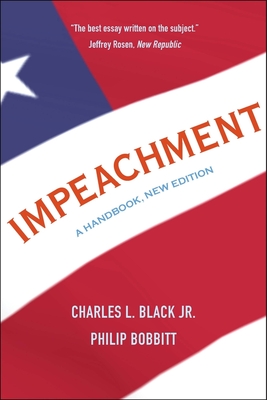 Originally published at the height of the Watergate crisis, Charles Black’s classic Impeachment: A Handbook has long been the premier guide to the subject of presidential impeachment. Now thoroughly updated with new chapters by Philip Bobbitt, it remains essential reading for every concerned citizen.

“To understand impeachment, read this book. It shows how the rule of law limits power, even of the most powerful, and reminds us that the impact of the law on our lives ultimately depends on the conscience of the individual American.”—Bill Bradley, former United States senator

“The most important book ever written on presidential impeachment.”—Lawfare

“A model of how so serious an act of state should be approached.”—Wall Street Journal

“The finest text on the subject I have ever read.”—Ben Wittes

Praise For Impeachment: A Handbook…

“Bobbitt’s book engages deeply on what constitutes ‘high crimes and misdemeanors.’ It concludes that ‘careful, patient inquiry’ must denote a pattern of ‘wanton constitutional dereliction’ and establish acts of misconduct that badly undermine the very ‘legitimacy’ of the government and ‘seriously threaten the order of political society.’”—Greg Sargent, Washington Post

“Yale University Press [has] produced a new edition of Charles Black’s Impeachment: A Handbook, with substantial new scholarship added by Philip Bobbitt. It is Bobbitt's mission to reclaim for impeachment the status of a legal process, in which constitutional interpretation is guided by careful and rigorously argued attention to text, history, structure, doctrine, prudence and what he calls ‘ethos’—a concern with the ‘primacy of the rule of law.’ His presentation is powerful and convincing.”—Bob Bauer, Lawfare blog

“Black’s work — now Black and Bobbitt’s — continues to set the standard for responsible study of a subject that is easy and advantageous to misunderstand. This is a book that performs its message, exercising as well as urging common sense and educated restraint.”—Jane Chong, Los Angeles Review of Books

“The original edition arrived as the crisis of Nixon’s presidency was coming to a head. It was addressed not to scholars but to ‘the citizen.’ Its virtue, Bobbitt explains in his introduction to the new edition, was that it didn’t instruct readers ‘what to think’ about the specific impeachment-related questions that were swirling around Washington, but rather ‘how to think’: how to derive a legal answer ‘from the text, history, structure, doctrine, practicality, and ethos of the Constitution.’ ”—Linda Greenhouse, New York Review of Books

“To understand impeachment, read Black & Bobbitt. They show how the rule of law limits power, even of the most powerful, and remind us that the impact of the law on our lives ultimately depends on the conscience of individual members of Congress serving as jurors or judges.”—Bill Bradley, former United States Senator

"Charles Black’s book on impeachment was an instant classic when it was first published in 1974, and it is even more timely today now that Philip Bobbitt has trenchantly brought it up to date.”—Michael Beschloss, author of Presidents of War

“In 1974, a law professor named Charles L. Black published an extraordinary volume entitled, Impeachment: A Handbook. It is the finest text on the subject I have ever read.”—Ben Wittes