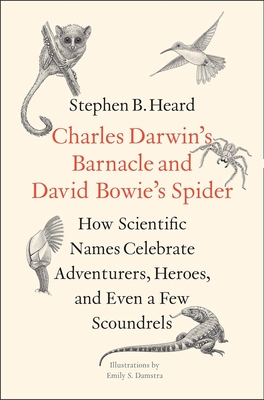 An engaging history of the surprising, poignant, and occasionally scandalous stories behind scientific names and their cultural significance, “More fun than you’ve ever had with taxonomy in your whole entire life!" (Diana Gabaldon, author of the Outlander series and PhD in Quantitative Behavioral Ecology)

Ever since Carl Linnaeus’s binomial system of scientific names was adopted in the eighteenth century, scientists have been eponymously naming organisms in ways that both honor and vilify their namesakes. This charming, informative, and accessible history examines the fascinating stories behind taxonomic nomenclature, from Linnaeus himself naming a small and unpleasant weed after a rival botanist to the recent influx of scientific names based on pop-culture icons—including David Bowie’s spider, Frank Zappa’s jellyfish, and Beyoncé’s fly.

Exploring the naming process as an opportunity for scientists to express themselves in creative ways, Stephen B. Heard’s fresh approach shows how scientific names function as a window into both the passions and foibles of the scientific community and as a more general indicator of the ways in which humans relate to, and impose order on, the natural world.

Praise For Charles Darwin's Barnacle and David Bowie's Spider: How Scientific Names Celebrate Adventurers, Heroes, and Even a Few Scoundrels…

“Delightful. . . .  This book is for everyone, including students of the life sciences—an immediate classic of science folklore.”—Choice

“In Charles Darwin’s Barnacle and David Bowie’s Spider, Stephen Heard tells some of the remarkable stories behind the names of species—and teaches us about how scientists make sense of the natural world along the way. A true pleasure to read.”—Carl Zimmer, author of She Has Her Mother’s Laugh: The Powers, Perversions, and Potential of Heredity

“More fun than you’ve ever had with taxonomy in your whole entire life! Delightfully written, thoroughly researched, makes you want to learn Latin, and will give good dinner party stories forever.”—Diana Gabaldon, author of the Outlander series, and PhD in Quantitative Behavioral Ecology

“Charles Darwin's Barnacle and David Bowie's Spider is carefully researched, well-written, and contains a wealth of insightful comments. Stephen Heard is a talented writer with a good sense of humor, and he knows how to tell a story.”—Paul Faber, Oregon State University

“Stephen Heard’s prose fairly sings with enthusiasm, and he presents truly fascinating stories about the names of living things – stories I guarantee you’ve never heard before.”—Daniel Lewis, author of Belonging on an Island

Stephen B. Heard is professor of biology at the University of New Brunswick in Canada. He is the author of The Scientist’s Guide to Writing: How to Write Easily and Effectively Throughout Your Scientific Career.
Loading...
or support indie stores by buying on