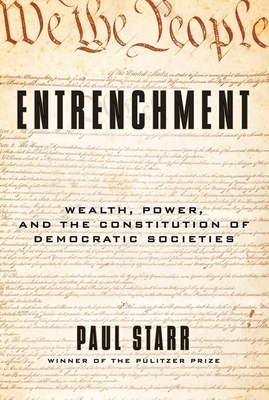 Wealth, Power, and the Constitution of Democratic Societies

Much of our politics today, Paul Starr writes, is a struggle over entrenchment—efforts to bring about change in ways that opponents will find difficult to undo. That is why the stakes of contemporary politics are so high. In this wide‑ranging book, Starr examines how changes at the foundations of society become hard to reverse—yet sometimes are overturned. Overcoming aristocratic power was the formative problem for eighteenth‑century revolutions. Overcoming slavery was the central problem for early American democracy. Controlling the power of concentrated wealth has been an ongoing struggle in the world’s capitalist democracies. The battles continue today in the troubled democracies of our time, with the rise of both oligarchy and populist nationalism and the danger that illiberal forces will entrench themselves in power. Entrenchment raises fundamental questions about the origins of our institutions and urgent questions about the future.


Praise For Entrenchment: Wealth, Power, and the Constitution of Democratic Societies…

“Exceptionally insightful. . . . Starr’s command of both European and American history . . . is most impressive.”—Alan Wolfe, Democracy


"With the depth of historic and political insight he is celebrated for, Paul Starr gives us a new and crucial lens through which to view what is happening in America—the entrenchment of great wealth through political power strong enough to lock in that wealth, and, hence, perpetuate its power. Starr’s great achievement is to view the struggle of our era not in narrow partisan terms, but through the framework of increasingly concentrated power, and to reveal the multiple ways it is changing the very definition of American society. A tour de force."—Robert B. Reich, author of The Common Good and Saving Capitalism

“An original framework which casts new light on America’s political and constitutional predicaments in the age of Trump.”—Bruce Ackerman, author of Revolutionary Constitutions: Charismatic Leadership and the Rule of Law

"Written with incisive range and inviting lucidity, Entrenchment sharpens our understanding of how deep inequalities, as well as decent social, economic, and political outcomes, have been produced and protected by institutional design. The book helps guide a much-needed defense of liberal democracy at a time of great stress."—Ira Katznelson, author of When Affirmative Action Was White: An Untold History of Racial Inequality in Twentieth-Century America

"Entrenchment is Paul Starr’s most ambitious book to date, analyzing how political, social, and economic changes consolidate and endure. Once again, Starr’s brilliant and lucid historical sociology illuminates the present as well as the past."—Sean Wilentz, author of The Rise of American Democracy: Jefferson to Lincoln

"A masterful engagement with many of the major challenges we confront. One key theme in this must-read book is the ease with which even complex open systems, such as a sovereign nation, resist transformation."—Saskia Sassen, author of Expulsions

Paul Starr is professor of sociology and public affairs at Princeton University, cofounder and founding coeditor of The American Prospect magazine and winner of the Pulitzer Prize for General Nonfiction and the Bancroft Prize in American History. He has published seven previous books including The Social Transformation of American Medicine, The Creation of the Media, Freedom’s Power, and Remedy and Reaction.
Loading...
or support indie stores by buying on