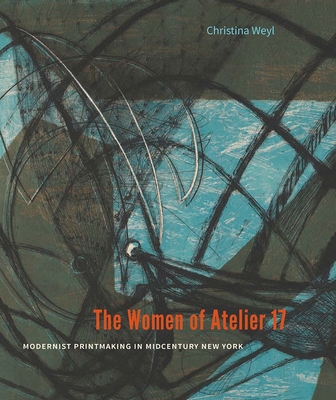 The Women of Atelier 17 (Hardcover)

A timely reexamination of the experimental New York print studio Atelier 17, focusing on the women whose work defied gender norms through novel aesthetic forms and techniques

In this important book Christina Weyl takes us into the experimental New York print studio Atelier 17 and highlights the women whose work there advanced both modernism and feminism in the 1940s and 1950s. Weyl focuses on eight artists—Louise Bourgeois, Minna Citron, Worden Day, Dorothy Dehner, Sue Fuller, Alice Trumbull Mason, Louise Nevelson, and Anne Ryan—who bent the technical rules of printmaking and blazed new aesthetic terrain with their etchings, engravings, and woodcuts. She reveals how Atelier 17 operated as an uncommonly egalitarian laboratory for revolutionizing print technique, style, and scale. It facilitated women artists’ engagement with modernist styles, providing a forum for extraordinary achievements that shaped postwar sculpture, fiber art, neo-Dadaism, and the Pattern and Decoration movement. Atelier 17 fostered solidarity among women pursuing modernist forms of expression, providing inspiration for feminist collective action in the 1960s and 1970s. The Women of Atelier 17 also identifies for the first time nearly 100 women, many previously unknown, who worked at the studio, and provides incisive illustrated biographies of selected artists.

Christina Weyl is an independent scholar who focuses on American printmaking and women artists.


Praise For The Women of Atelier 17: Modernist Printmaking in Midcentury New York…

“Atelier 17 . . . transformed the printmaking landscape in the US. Women’s contributions to that process come to life in this wide-ranging and thoughtful book.”—Hyperallergic
“With scholarship about women artists having been mostly neglected until the latter half of the twentieth century, it is rewarding to see the burgeoning literature on women in the arts, including this fascinating book on the women printmakers of Atelier 17.”—Natalia Lonchyna, ARLIS/NA Reviews
“Weyl’s book is much more complex, and her project far more radical than one might suspect. Full of lush illustrations and detailed biographies, the book easily draws in the reader . . . But the monograph ranges far beyond an expanded understanding of Atelier 17 . . . to larger examinations of the social, political, economic, and cultural fields in which these artists operated.”—Jennifer Farrell, Gotham Center for New York City History
“Christina Weyl marshals impressive archival research to excavate the lives and social networks of women printmakers in Atelier 17 and offers convincing and beautifully described accounts of the strength and innovation of their work.”—Jennifer L. Roberts, Harvard University
“In this compelling study, Christina Weyl illuminates mid-twentieth century American women printmakers’ formidable accomplishments in the face of art-world prejudice against their chosen medium and broader societal bias against their gender.”—Paula Wisotzki, Loyola University Chicago