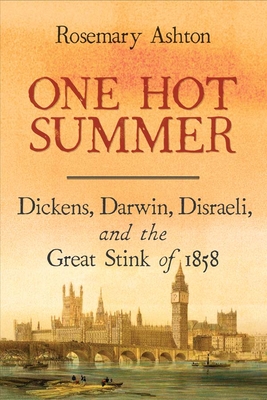 A unique, colorful view of Victorian London when residents both famous and now-forgotten endured “the Great Stink” across one hot summer​

While 1858 in London may have been noteworthy for its broiling summer months and the related stench of the sewage-filled Thames River, the year is otherwise little remembered. And yet, historian Rosemary Ashton reveals in this compelling microhistory, 1858 was marked by significant, if unrecognized, turning points. For ordinary people, and also for the rich, famous, and powerful, the months from May to August turned out to be a summer of consequence.

Ashton mines Victorian letters and gossip, diaries, court records, newspapers, and other contemporary sources to uncover historically crucial moments in the lives of three protagonists—Charles Dickens, Charles Darwin, and Benjamin Disraeli. She also introduces others who gained renown in the headlines of the day, among them George Eliot, Karl Marx, William Thackeray, and Edward Bulwer Lytton. Ashton reveals invisible threads of connection among Londoners at every social level in 1858, bringing the celebrated city and its citizens vibrantly to life.

Praise For One Hot Summer: Dickens, Darwin, Disraeli, and the Great Stink of 1858…

“Superbly researched . . . argues that the year was a crucial one in the lives of the three great Victorians: Dickens, Disreali and Darwin.”—Paula Byrne, Times

“Rosemary Ashton’s new book charts four boiling hot months in 1858 when the sewage of London went awry and . . . can often feel much closer to how people actually lived and breathed than grander, more panoramic narratives.”—Craig Brown, Mail on Sunday

“England was changing in that smelliest of summers, and Ashton gives us a finely scented snapshot of it all.”—Simon Heffer, Daily Telegraph

“[The Great Stink] is a terrific subject for Ms. Ashton . . . She excels at unearthing and explaining the daily distractions of the nose-holding populace over the course of the summer: horse races, art shows, murder and divorce trials . . . Her detailed atomic record produces thought-provoking coincidences and reminds us of figures who deserve to be better known . . . In short: This book does not stink. Far from it.”—Alexandra Mullen, Wall Street Journal

“Not just another book about the Victorians, but one that could just as easily have been written by them. Turning its pages is like opening a window on to their world.”—Robert Douglas-Fairhurst, Guardian

“The book’s real strength is its description of London quivering between modernity and the dark ages . . . There is plenty to enjoy in this panorama of Victorians in their heyday.”—The Economist


“An enjoyable account of an eventful summer in mid-Victorian England.”—Library Journal

“A brilliant account of the ways in which various issues collided and entangled, showing the value of taking one year in depth, rather than individual themes over a longer period, to show unexpected and illuminating connections.”—Martin Daunton, Victorian Studies

"The new celebrity cult developed by the popular press collided with the revolting state of the Thames, in that hot summer. Rosemary Ashton's brilliant description of the result is a 'must-read', whatever this summer brings."—Liza Picard, author of Victorian London

"Rosemary Ashton's evocative and intriguing portrait of public, private and political tensions in the long hot summer of 1858 delivers fascinating insights into the interconnected lives of her subjects."—Lee Jackson, author of Dirty Old London

"History-writing too often confines itself to great events set in motion by great people. In One Hot Summer Rosemary Ashton has produced history-writing of the most important kind, as she explores what happens in between those great events, and great people, and connects previously unconnected subjects and ideas. It reads as easily as fiction, as excitingly as a thriller. It is history as it should be written, but so rarely is."—Judith Flanders, author of The Victorian City

Rosemary Ashton is Emeritus Quain Professor of English Language and Literature, University College London. She is the author of ten previous books and a fellow of the British Academy and of the Royal Society of Literature. She lives in London.
Loading...
or
Not Currently Available for Direct Purchase