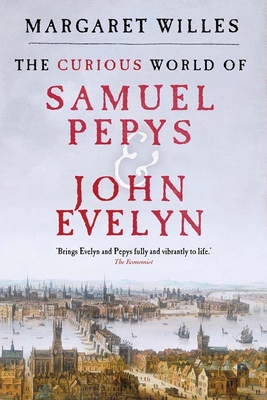 The Curious World of Samuel Pepys and John Evelyn

Samuel Pepys and John Evelyn are two of the most celebrated English diarists. They were also extraordinary men and close friends. This first full portrait of that friendship transforms our understanding of their times.

Pepys was earthy and shrewd, while Evelyn was a genteel aesthete, but both were drawn to intellectual pursuits. Brought together by their work to alleviate the plight of sailors caught up in the Dutch wars, they shared an inexhaustible curiosity for life and for the exotic. Willes explores their mutual interests—diary-keeping, science, travel, and a love of books—and their divergent enthusiasms, Pepys for theater and music, Evelyn for horticulture and garden design. Through the richly documented lives of two remarkable men, Willes revisits the history of London and of England in an age of regicide, revolution, fire, and plague to reveal it also as a time of enthralling possibility.

Praise For The Curious World of Samuel Pepys and John Evelyn…

“Two centuries on, this scholarly and readable book brings the two men together again. The result, the biographical equivalent of a buddy film, is both entertaining and unexpectedly revealing about the extraordinary times they lived in.”—Andrew Taylor, Times (London)

"Ms. Willes brings Evelyn and Pepys fully and vibrantly to life. She makes the reader feel their foibles, their virtues, their pleasure and their pain; and on almost every page there is a detail to be thought about, recorded, relayed. It is a fitting tribute to two figures who so cherished curiosity—and who did so much to contribute to the curiosity of their age."—Economist

“Willes’s book is produced by Yale to its usual high standard, sumptuously illustrated and beautifully printed. Those connoisseurs of book production Pepys and Evelyn would have handled and read it with pleasure and added it to their own collections.”—Richard Chartres, Church Times

“Samuel Pepys and John Evelyn were two great friends and lauded diariests who have informed—and transformed—our understanding of the 17th century . . . Writer Margaret Willes relates grand sights and the minutiae of their age, giving each man his equal due while admiring their unique meeting of the minds.”—British Heritage Travel

“Drawing deeply on the diaries of Pepys and Evelyn, as well as on archival research, Willes skillfully probes the diarists’ wide-ranging reflections on and often strong opinions about Restoration England. Although Pepys’s earthy reports . . . have long been anthologized, Evelyn’s less colorful accounts of the same events are comparatively obscure. Willes corrects this oversight in her thoughtful readings of both men’s diaries while also tracing the deep friendship that grew between them in spite of their many differences. . . . Her splendid book has performed the yeoman’s work of recovering Evelyn and his diary for us.”—Publishers Weekly

“This stimulating book celebrates the lives and passions of the two great diarists of Restoration England. . . . Willes provides not a dual biography but a three-part exploration of the world in which they lived, their private lives, and their interests, both shared and unique. Pepys is the better-known figure, but one comes to appreciate Evelyn as Pepys did: ‘The more I know him, the more I love him.’”—Choice

"Margaret Willes paints an increasingly detailed - and always fascinating - picture of seventeenth-century London. Both Samuel Pepys's frank Diary and John Evelyn's anxiously tidied account of the first years of the Restoration remain vivid today. Willes's book is a 'must' for anyone interested in people, or London, or the growth of society after the King returned."—Liza Picard, author of Restoration London.


"Glorious! Not only does Margaret Willes shed bright new light on two of the 17th century's most endearing characters, she recreates the worlds they inhabited with remarkable elegance and clarity."—Adrian Tinniswood, author of His Invention So Fertile: A Life of Christopher Wren.

"This is a well-researched, illuminating and enjoyable book. Evelyn and Pepys lived through some of the most dramatic events in English history: regicide, plague, the Great Fire and revolution. These great diarists have left us unique and valuable insights into their world, when advances were being made in scientific thought, gardening, medicine, and international trade, despite the perils of the times. This book captures that energy and weaves details drawn from the writings of both men into a colourful and convincing panorama of seventeenth-century London."—Dr. Margarette Lincoln, Visiting Research Fellow at Goldsmiths, University of London and Curator Emeritus at the National Maritime Museum, Greenwich

Margaret Willes, formerly publisher at the National Trust, is author of several books, including Reading Matters and The Gardens of the British Working Class. She lives in London.
Loading...
or
Not Currently Available for Direct Purchase