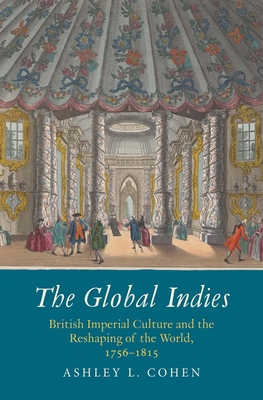 British Imperial Culture and the Reshaping of the World, 1756-1815 (The Lewis Walpole Series in Eighteenth-Century Culture and History)

A study of British imperialism’s imaginative geography, exploring the pairing of India and the Atlantic world from literature to colonial policy

In this lively book, Ashley Cohen weaves a complex portrait of the imaginative geography of British imperialism. Contrary to most current scholarship, eighteenth-century Britons saw the empire not as separate Atlantic and Indian spheres but as an interconnected whole: the Indies. Crisscrossing the hemispheres, Cohen traces global histories of race, slavery, and class, from Boston to Bengal. She also reveals the empire to be pervasively present at home, in metropolitan scenes of fashionable sociability. Close-reading a mixed archive of plays, poems, travel narratives, parliamentary speeches, political pamphlets, visual satires, paintings, memoirs, manuscript letters, and diaries, Cohen reveals how the pairing of the two Indies in discourse helped produce colonial policies that linked them in practice. Combining the methods of literary studies and new imperial history, Cohen demonstrates how the imaginative geography of the Indies shaped the culture of British imperialism, which in turn changed the shape of the world.


Praise For The Global Indies: British Imperial Culture and the Reshaping of the World, 1756-1815 (The Lewis Walpole Series in Eighteenth-Century Culture and History)…

“An extraordinarily original and important study; one that has the potential to re-orient multiple fields of enquiry. Both in its conception and its execution we are dealing with scholarship of the highest order.”—Daniel O’Quinn, University of Guelph

"Ashley Cohen challenges the separation in eighteenth-century scholarship between the east and the west. This trailblazing book will become an indispensable point of reference for future studies in the field."—Ramesh Mallipeddi, University of Colorado Boulder


"Masterfully excavating eighteenth-century Britain’s mental map of empire, Cohen challenges us to read the past as a place that made its world through the work of critical thinking. Powerful, innovative scholarship."—David Francis Taylor, University of Oxford

"Combining magisterial overview with exquisite detail, this book is utterly compelling. Every page bursts with ideas and bustles with a fascinating cast of international characters. It will become a classic."—Isabel Hofmeyr, author of Gandhi's Printing Press

Ashley Cohen is assistant professor of English at the University of Southern California. She works at the intersection of eighteenth-century, postcolonial, and South Asia studies. Her critical edition of Lady Nugent’s East India Journal was published in 2014.
Loading...
or
Not Currently Available for Direct Purchase