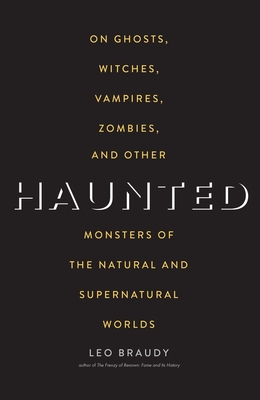 On Ghosts, Witches, Vampires, Zombies, and Other Monsters of the Natural and Supernatural Worlds

Leo Braudy, a finalist for both the National Book Award and the National Book Critics Circle Award, has won accolades for revealing the complex and constantly shifting history behind seemingly unchanging ideas of fame, war, and masculinity.

Continuing his interest in the history of emotion, this book explores how fear has been shaped into images of monsters and monstrosity. From the Protestant Reformation to contemporary horror films and fiction, he explores four major types: the monster from nature (King Kong), the created monster (Frankenstein), the monster from within (Mr. Hyde), and the monster from the past (Dracula). Drawing upon deep historical and literary research, Braudy discusses the lasting presence of fearful imaginings in an age of scientific progress, viewing the detective genre as a rational riposte to the irrational world of the monstrous. Haunted is a compelling and incisive work by a writer at the height of his powers.

Praise For Haunted: On Ghosts, Witches, Vampires, Zombies, and Other Monsters of the Natural and Supernatural Worlds…

“Mr. Braudy’s narrative spans centuries, continents and genres high and low, from the Sirens that tempted Odysseus to the demons Sarah Michelle Gellar faced down in Buffy the Vampire Slayer.”—Andrew Hazlett, Wall Street Journal
"Braudy is deft and comprehensive, a veritable Linnaeus of the underworldly oversoul. . . . He also has a kangaroo capacity for crossing huge distances at a bound, moving with equal zest and confidence among biblical, classical, medieval, Enlightenment and Hollywood figures and conceits."—Gregory Maguire, New York Times Book Review
“A worthy book – impeccably researched, fluently written and dispassionate in just the way professional historians admire.”—Gerard DeGroot, The Times
"[Displays] an impressive depth of knowledge . . . thanks to the way Braudy has reframed the vast canvas on which stories of horror and terror are depicted, I don’t think I will ever watch a horror movie quite the same way again."—Jonathan Kirsch, The Jewish Journal
“Our fears are quite complicated, and, as Braudy demonstrates, the study of them is necessarily interdisciplinary. . . . Braudy focuses primarily on the convergence of various issues and debates that arose in the realms of eighteenth- and nineteenth-century philosophy, science, psychology, and the arts that have shaped how we imagine the monstrous.”—Adam Golub, American Literary Histor
Finalist for the 2016 Bram Stoker Award in the Superior Achievement in Non-Fiction category

Leo Braudy is University Professor and Bing Chair in English and American Literature at the University of Southern California. His many books include The Frenzy of Renown and From Chivalry to Terrorism.
or
Not Currently Available for Direct Purchase