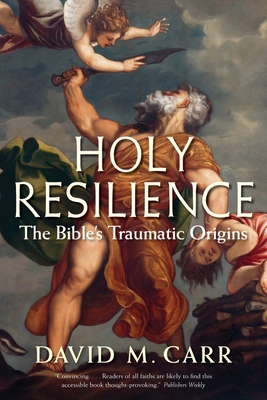 Human trauma gave birth to the Bible, suggests eminent religious scholar David Carr. The Bible’s ability to speak to suffering is a major reason why the sacred texts of Judaism and Christianity have retained their relevance for thousands of years. In his fascinating and provocative reinterpretation of the Bible’s origins, the author tells the story of how the Jewish people and Christian community had to adapt to survive multiple catastrophes and how their holy scriptures both reflected and reinforced each religion’s resilient nature.

Carr’s thought-provoking analysis demonstrates how many of the central tenets of biblical religion, including monotheism and the idea of suffering as God’s retribution, are factors that provided Judaism and Christianity with the strength and flexibility to endure in the face of disaster. In addition, the author explains how the Jewish Bible was deeply shaped by the Jewish exile in Babylon, an event that it rarely describes, and how the Christian Bible was likewise shaped by the unspeakable shame of having a crucified savior.

“Convincing . . . Readers of all faiths are likely to find this accessible book thought-provoking.”—Publishers Weekly

“[Carr] rereads the familiar materials of the Bible in light of trauma theory and opens the way for a fresh and suggestive interpretation . . . Carr has provided an accessible guide for further work, and this new cognitive discipline for scripture study is sure to be of immense importance for some time to come.”—Walter Brueggemann, Christian Century

“This book, appropriate for both scholarly and general audiences, charts the origins of the Christian Bible . . .  The volume is helpful for nonspecialists interested in exploring questions of how the Bible came to be.”—Tyler Mayfield, Religious Studies Review

“David Carr’s brilliant book is a magisterial reinterpretation of the emergence and sustenance of biblical Scripture. It is a pioneering, powerful, and poignant treatment of a traumatized people making sense of a catastrophic world—yet still able to find hope in compassion and endurance in empathy!”—Cornel West

“Clear and persuasive, Holy Resilience illuminates the origins of the Bible by bringing the early history of a traumatized people to light. This fascinating and engrossing book peels away the veils of history to teach us about ourselves.”—Mark Epstein, MD, author of The Trauma of Everyday Life

"Taking on the entire Christian canon, David Carr courageously and creatively builds upon his established skill as an interpreter of Scripture to provocatively examine the role of trauma in its creation.  His striking interdisciplinary exploration is an important accomplishment."—Daniel Smith-Christopher, Loyola Marymount University of Los Angeles

"This remarkable book, which reads like a thriller, tells the story of how centuries of catastrophes and traumas shaped ancient Israel of Old Testament times and later Jewish and Christian civilizations. Anyone who wishes to know who we are and where we come from should read this book."— Israel Finkelstein, Tel Aviv University

David M. Carr is professor of Old Testament at the Union Theological Seminary in New York City and a leading specialist on how the Bible was formed. He lives in New York City.
Loading...
or
Not Currently Available for Direct Purchase