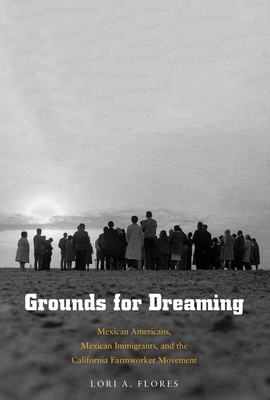 Known as “The Salad Bowl of the World,” California’s Salinas Valley became an agricultural empire due to the toil of diverse farmworkers, including Latinos. A sweeping critical history of how Mexican Americans and Mexican immigrants organized for their rights in the decades leading up to the seminal strikes led by Cesar Chavez, this important work also looks closely at how different groups of Mexicans—U.S. born, bracero, and undocumented—confronted and interacted with one another during this period.


Praise For Grounds for Dreaming: Mexican Americans, Mexican Immigrants, and the California Farmworker Movement (The Lamar Series in Western History)…

"This well-researched book suggests that farmworkers have reasons—grounds—for hoping for better working conditions."—Choice

“Grounds for Dreaming is a masterfully written and sophisticated piece of historical scholarship that makes significant contributions to many fields of history.”—American Historical Review

“Flores has produced a community study that is built on the struggles of Mexicans and Mexican Americans in the Salinas Valley but that also engages with broader historiographical concerns.”—Labor

“A critical volume for any scholar interested in labor organizing or farmworker movements in the late twentieth century.”—Agricultural History

“This well-researched, well-conceived, and well-written text broadens the conversation by expanding its geographic boundaries and by elevating the work of activists in the Salinas Valley.”—Pacific Historical Review

“Thanks to Lori A. Flores, we now have a historical account that gives us a deeper understanding of this bountiful and contested place.”—Journal of American History

Winner of the 2016 International Latino Book Awards in the Best History Book category.

Won the 2017 Martin Ridge Award from the Historical Society of Southern California, which honors the best book on California history that emphasizes the twentieth century onward.

“The place long celebrated as America’s salad bowl reveals itself in Lori Flores’s eloquent and deeply researched account to be an unusually potent vantage point from which to assess not only the forces behind much of our food production but also the making of American ideas of race and community, and our capacity for reform and social justice.  Grounds for Dreaming represents the debut of an important new voice in American history."—Karl Jacoby, Columbia University


"A beautifully crafted community history that underscores the significance of rural lives, especially Mexican lives, to California and the nation. With a vibrant grace, Flores chronicles the people and events that made Salinas a crucible for farm labor relations."—Vicki L. Ruiz, University of California, Irvine


"This terrific study of California's all-important Salinas Valley is the first to capture that region’s history from the 1930s into the 1990s. Beautifully written and researched, it will be indispensable for general readers and for scholars interested in Western agriculture, civil rights movements, and Latino history."—Stephen Pitti, Yale University

Lori A. Flores is associate professor of history at the State University of New York at Stony Brook.
Loading...
or
Not Currently Available for Direct Purchase