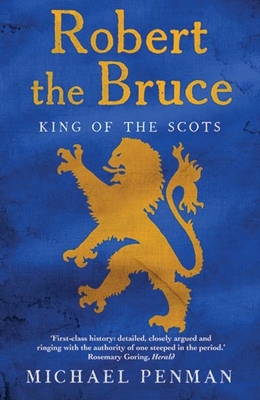 King of the Scots

Robert the Bruce (1274–1329) famously defeated the English at Bannockburn and became the hero king responsible for Scottish independence. In this fascinating new biography of the renowned warrior, Michael Penman focuses on Robert’s kingship in the fifteen years that followed his triumphant victory and establishes Robert as not only a great military leader but a great monarch.

Robert faced a slow and often troubled process of legitimating his authority, restoring government, rewarding his supporters, accommodating former enemies, and controlling the various regions of his kingdom, none of which was achieved overnight. Penman investigates Robert’s resettlement of lands and offices, the development of Scotland’s parliaments, his handling of plots to overthrow him, his relations with his family and allies, his piety and court ethos, and his conscious development of an image of kingship through the use of ceremony and symbol. In doing so, Penman repositions Robert within the context of wider European political change, religion, culture, and national identity as well as recurrent crises of famine and disease.

Michael Penman is senior lecturer in history at the University of Stirling.

Praise For Robert the Bruce: King of the Scots…

‘His biography, well researched, fresh and distinctive, knocks off the top perch G.W.S. Barrow’s Robert the Bruce and the Community of the Realm of Scotland, published in 1965.’—Katie Stevenson, London Review of Books
‘Penman’s book is first-class history: detailed, closely argued and ringing with the authority of one steeped in the period . . .Penman’s scholarship is commendable, his style clear, his contribution to this field a truly original and quietly groundbreaking addition to the known facts of Robert the Bruce. It is essential reading as midsummer draws near – and long after.’ —Rosemary Goring, The Herald
'Robert Bruce’s piety is one of the fascinating themes that characterise Michael Penman’s full and definitive account of the king’s life and reign. A magesterial study.'—Michael Prestwich, author of Edward I