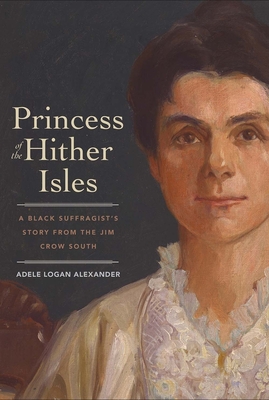 Princess of the Hither Isles

A Black Suffragist’s Story from the Jim Crow South

"Both a definitive rendering of a life and a remarkable study of the interplay of race and gender in an America whose shadows still haunt us today.”—Henry Louis Gates, Jr.

“If you combine the pleasures of a seductive novel, discovering a real American heroine, and learning the multiracial history of this country that wasn't in our textbooks, you will have an idea of the great gift that Adele Logan Alexander has given us.”—Gloria Steinem

Born during the Civil War into a slaveholding family that included black, white, and Cherokee forebears, Adella Hunt Logan dedicated herself to advancing political and educational opportunities for the African American community. She taught at Alabama’s Tuskegee Institute but also joined the segregated woman suffrage movement, passing for white in order to fight for the rights of people of color. Her determination—as a wife, mother, scholar, and activist —to challenge the draconian restraints of race and gender generated conflicts that precipitated her tragic demise.

Historian Adele Logan Alexander—Adella Hunt Logan’s granddaughter—portrays Adella, her family, and contemporaries such as Booker T. Washington, Susan B. Anthony, Frederick Douglass, George Washington Carver, Theodore Roosevelt, and W. E. B. Du Bois. Alexander bridges the chasms that frustrate efforts to document the lives of those who traditionally have been silenced, weaving together family lore, historical research, and literary imagination into a riveting, multigenerational family saga.


Praise For Princess of the Hither Isles: A Black Suffragist’s Story from the Jim Crow South…

“In her magnificently achieved book in which narrative verisimilitude compensates history’s indifference to the un-white, the poor, and the female, Adele Logan Alexander spins a multi-generational family saga of stunning interracial complexity, remarkable cosmopolitanism, and heart-rending injustice. Looming over their lives was slavery’s aftermath, the nemesis ultimately fatal to Alexander’s indomitably modern Princess.”—David Levering Lewis, author of W. E. B. Du Bois, recipient of the Pulitzer Prize for Biography and the Bancroft Prize in History

“If you combine the pleasures of a seductive novel, discovering a real American heroine, and learning the multiracial history of this country that wasn't in our textbooks, you will have an idea of the great gift that Adele Logan Alexander has given us in Princess of the Hither Isles.  By writing about her own grandmother, she helps us discover our own country.”—Gloria Steinem

“There is a beauty in reading Adele Logan Alexander’s epic biography of her grandmother that comes with knowing it is, for her, a devotional act, not to romanticize the past but to set out fearlessly to unearth – and touch – its very heart. Alexander’s Princess of the Hither Isles is both a definitive rendering of a life and a remarkable study of the interplay of race and gender in an America whose shadows still haunt us today.”—Henry Louis Gates, Jr., Harvard University

“At the center of this extraordinary book is Adella Hunt Logan, the early 20th century suffragist, whose story has been shrouded by myth, inattention to race and gender, and the cruel ironies of biracial identity. In reconstructing her life through past generations, memoir, history, and fable come to life, Adele Alexander has given us a rich saga of family and nation.”—Paula J. Giddings is the author of IDA, A Sword Among Lions: Ida B. Wells and the Campaign Against Lynching

Adele Logan Alexander taught for many years at George Washington University. She is the author of Ambiguous Lives: Free Women of Color in Rural Georgia, 1789–1879 and Homelands and Waterways: The American Journey of the Bond Family, 1846­–1926.

1. The author employs a blend of deep historical research, family lore, and literary imagination to bring her own grandmother, the black suffragist Adella Hunt Logan to life. What do you think of this genre-defying approach?

2. What do Adella’s experiences suggest about the importance, efficacy, and possible pitfalls of interracial relationships?

3. Discuss the importance of family as a determining factor in Adella’s world and in the black community.

4. In the context of contemporary thinking and parlance, discuss whether Adella Hunt Logan should be characterized as a black feminist.

5. Adella’s life includes both extraordinary achievement and significant tragedy. How does she cope with loss and stress at various stages of her life?

6. Even though they have many privileges compared to other African Americans of their time, Adella and her family face racial discrimination in all aspects of their lives. What has changed? What has stayed the same?

7. Adella endures two risky and unwanted pregnancies following a nephrectomy (kidney removal), a complicated and dangerous procedure.  How does this experience impact her views on women’s right to control their own bodies?  How does the requirement that her husband provide permission for this serious medical procedure affect Adella’s thinking?

8. The book includes instances when Adella passes as white, as well as occasions when she corrects people who misidentify her as a white woman.  Discuss the ways Adella and members of her mixed-race family navigate the complex racial landscape.  Does passing for white constitute a moral betrayal of the African American community?

9. The biases of prominent activists of her time—people she worked with and otherwise admired—disappoint Adella on several occasions.  Both Susan B. Anthony’s racism and Booker T. Washington’s sexism frustrate her. How does Adella handle these situations? How might she handle them differently today?

10. Instances of sexual abuse of girls and women by powerful men appear throughout the book. Discuss the ways sexual misconduct and violence are handled in Adella’s world and in her time.  How do racial factors play an exacerbating role with respect to such abuse?  Have things changed? How?