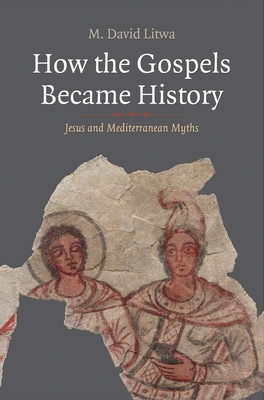 How the Gospels Became History

A compelling comparison of the gospels and Greco-Roman mythology which shows that the gospels were not perceived as myths, but as historical records

In this eye-opening work, M. David Litwa explores how and why what later became the four canonical gospels take on a historical cast that remains vitally important for many Christians today. Offering an in-depth comparison with other Greco-Roman stories that have been shaped to seem like history, Litwa shows how the evangelists responded to the pressures of Greco-Roman literary culture by using well-known historiographical tropes such as the mention of famous rulers and kings, geographical notices, the introduction of eyewitnesses, vivid presentation, alternative reports, and so on. In this way, the evangelists deliberately shaped myths about Jesus into historical discourse to maximize their believability for ancient audiences.

Praise For How the Gospels Became History: Jesus and Mediterranean Myths (Synkrisis)…

“[Litwa] cuts the Gordian knot by asserting that the gospel writers cloaked the myth of Jesus as an incarnation of God in historical terms in order to bolster the plausibility and attraction of the gospels. . . . [A] sophisticated analysis.”—John R. Barker, OFM, Bible Today

“How the Gospels Became History provides an excellent consideration of the literary connections of the ancient Mediterranean and demonstrates conclusively that the evangelists inherited and imitated the Greek and Roman historiographical tradition. Litwa’s ability to clearly explain the literary connections for each topic makes this an outstanding book for early- and mid-career scholars, graduate students, and capstone level undergraduates.”—Andrew Steck, Bryn Mawr Classical Review

“Litwa offers a philosophically sophisticated yet immanently accessible explanation of the relationship between history and myth in the early Christian gospels.”—Clare K. Rothschild, author of Paul in Athens


“In this book Litwa introduces the category of “mythic historiography” and shows that it is a compelling description of what the Gospels are. He rightly argues that these narratives make truth claims about individual events. At the same time, many of the events cannot be accepted in our culture generally as historical fact. The qualifier “mythic” grasps this cultural situation while indicating the deep existential importance of the Gospels that engages many readers.”—Adela Yarbro Collins, Yale Divinity School

“In this remarkably clear and learned work, David Litwa shows himself once more to be one of the best scholars working today in the intertextual terrain that lies between Greco-Roman literature and the New Testament.”—William Hutton, College of William and Mary

M. David Litwa is a scholar of ancient Mediterranean religions and Research Fellow at the Institute for Religion and Critical Inquiry in Melbourne. His most recent books include Desiring Divinity: Self-deification in Ancient Jewish and Christian Mythmaking and Hermetica II: The Excerpts of Stobaeus, Papyrus Fragments, and Ancient Testimonies.
Loading...
or
Not Currently Available for Direct Purchase