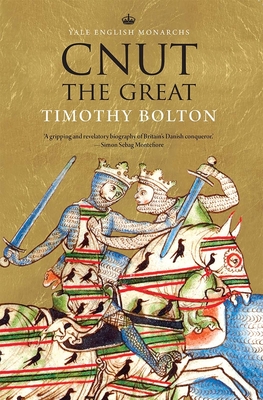 Historian Timothy Bolton offers a fascinating reappraisal of one of the most misunderstood of the Anglo-Saxon kings: Cnut, the powerful Danish warlord who conquered England and created a North Sea empire in the eleventh century. This seminal biography draws from a wealth of written and archaeological sources to provide the most detailed accounting to date of the life and accomplishments of a remarkable figure in European history, a forward-thinking warrior-turned-statesman who created a new Anglo-Danish regime through designed internationalism.

Timothy Bolton is the author of The Empire of Cnut the Great. He is an honorary fellow of both Cardiff and Aberdeen Universities.

Praise For Cnut the Great (The English Monarchs Series)…

“Yale’s invaluable English Monarchs series receives an impressive addition with this life of Cnut, the Danish warlord who conquered England in the first half of the 11th century. Bolton, a Stockholm-based scholar, restores Cnut’s image by drawing on a full range of Scandinavian and Anglo-Saxon sources.”
—Tony Barber, Financial Times

“The newest and by far the best general-interest biography of Cnut . . . [Bolton] marshals a greater array of sources, and uses them with more energetic creativity, than any previous writer on this king has done . . . Consistently fascinating.”—Steve Donoghue, Open Letters Monthly
“Well written [and] engaging”—D. J. Shepherd, Choice
"Smart, pithy, scholarly biography of one of England's least-understood but most intriguing kings. Another excellent volume in the authoritative Yale Monarchs series."—Dan Jones, author of The Plantagenets and The Wars of The Roses
"Through judicious use of Northern sources Timothy Bolton gives us a Cnut firmly rooted in Scandinavia, and a nuanced portrait of an English monarch and Scandinavian ruler active on a European stage."—Pauline Stafford, author of Queen Emma and Queen Edith
"Drawing on a range of rich resources from Old Norse sagas and poetry to charters, chronicles and laws from England, Timothy Bolton presents a fresh and engaging account of the compelling figure of Cnut in all his diverse glory."—Rory Naismith, King’s College London, author of Money and Power in Anglo-Saxon England
"In this stimulating and timely study, Timothy Bolton illuminates a king and an age of supreme importance. Cnut's forging of an Anglo-Scandinavian Empire and England's place within it are explored in original and thought-provoking ways - fresh evidence is put forward and well-known material considered anew. Bolton is a confident guide through the tangled thicket of sources that surround Cnut, handling English and Scandinavian texts with insight and sensitivity."— Martin J. Ryan, co-author of The Anglo-Saxon World