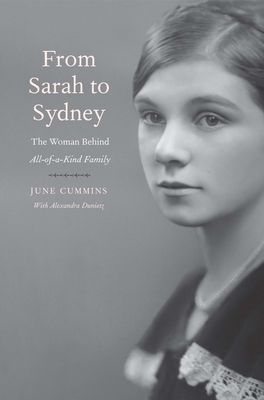 From Sarah to Sydney

The Woman Behind All-of-a-Kind Family

This is the first and only biography of Sydney Taylor (1904–1978), author of the award-winning All-of-a-Kind Family series of books, the first juvenile novels published by a mainstream publisher to feature Jewish children characters. The family—based on Taylor’s own as a child—includes five sisters, each two years apart, dressed alike by their fastidious immigrant mother so they all look the same: all-of-a-kind. The four other sisters’ names were the same in the books as in their real lives; only the real-life Sarah changed hers to the boyish Sydney while she was in high school. Cummins elucidates the deep connections between the progressive Taylor’s books and American Jewish experiences, arguing that Taylor was deeply influential in the development of national Jewish identity. This biography conveys the vital importance of children’s books in the transmission of Jewish culture and the preservation of ethnic heritage.

Praise For From Sarah to Sydney: The Woman Behind All-of-a-Kind Family…

"Expansive and detailed. . . . Generations of readers whose love of All-of-a-Kind-Family has kept it in print for seven decades will remember the cast of characters. . . . [A] fine first biography of Sydney Taylor."—Meghan Cox Gurdon, Wall Street Journal


"Taylor helped Jewish children see people like themselves and their traditions in the pages of books and also helped to bring Jewish culture to an American audience. . . . This accomplished biography combines interpretation of the stories with Taylor’s experiences and attitudes about marriage, women’s careers, politics and the arts."—Sandee Brawarsky, Jewish Week/Times of Israel

“This text has implications not only for Taylor's semi-autobiographical children’s series, but also for larger considerations of the influence of popular culture on American ‘national discourse.’”—Victoria Aarons, Trinity University

June Cummins was professor emerita of English and comparative literature at San Diego State University, where she made important contributions to its National Center for the Study of Children’s Literature. Alexandra Dunietz is a historian of the medieval Middle East.
Loading...
or support indie stores by buying on