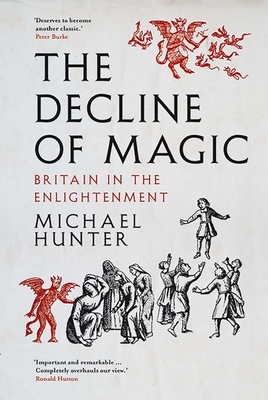 The Decline of Magic

Britain in the Enlightenment

In early modern Britain, belief in prophecies, omens, ghosts, apparitions and fairies was commonplace. Among both educated and ordinary people the absolute existence of a spiritual world was taken for granted. Yet in the eighteenth century such certainties were swept away. Credit for this great change is usually given to science – and in particular to the scientists of the Royal Society. But is this justified?

Michael Hunter argues that those pioneering the change in attitude were not scientists but freethinkers. While some scientists defended the reality of supernatural phenomena, these sceptical humanists drew on ancient authors to mount a critique both of orthodox religion and, by extension, of magic and other forms of superstition. Even if the religious heterodoxy of such men tarnished their reputation and postponed the general acceptance of anti-magical views, slowly change did come about. When it did, this owed less to the testing of magic than to the growth of confidence in a stable world in which magic no longer had a place.

Praise For The Decline of Magic: Britain in the Enlightenment…

“[D]evelops a different argument in suggesting that it was sceptical humanists and freethinkers, rather than scientists, who did most to discredit traditional magic.”—Tony Barber, Financial Times

"Next year will mark the 50th anniversary of Keith Thomas’s Religion and the Decline of Magic, one of the 20th century’s seminal historical texts. Hunter’s book has a similar-sounding title, but develops a different argument in suggesting that it was sceptical humanists and freethinkers, rather than scientists, who did most to discredit traditional magic"—Tony Barber, Financial Times 'Best Books of 2020: History'

"In 1971, Keith Thomas published what became a classic study on Religion and the Decline of Magic. Half a century later, Michael Hunter approaches that decline from another angle and offers an alternative explanation. Learned, lucid, acute and balanced, Hunter’s book deserves to become another classic."—Peter Burke, author of A Social History of Knowledge

"This is an important and remarkable book, the product of a master of the subject and period. It completely overhauls our view of that subject, answering questions which have hung over it for decades, and raises some exciting and disturbing questions for the present."—Ronald Hutton, author of The Witch

“Definitely a book to think with. Hunter brings new figures to scrutiny—Obadiah Oddy, Richard Mead, John Wagstaffe, Francis Hutchinson—and expertly weaves them into this tapestry of intellectual and cultural change.”—Justin Champion, author of The Pillars Of Priestcraft Shaken

Michael Hunter is Emeritus Professor of History, Birkbeck, University of London.
Loading...
or
Not Currently Available for Direct Purchase