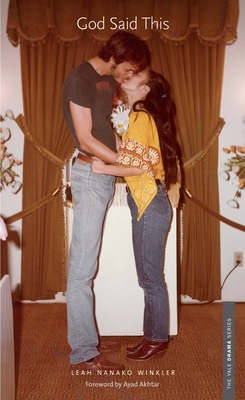 Set in Kentucky, this compelling drama centers around a Japanese-American family reunited as their matriarch
undergoes cancer treatment. The father, James, is a recovering alcoholic seeking redemption, and the two
daughters are struggling to overcome their differences—Sophie is an ardent born-again Christian, while Hiro
lives a single’s life in New York City. John, an old high school classmate of Hiro’s who is now a single dad, worries about leaving a legacy for his son. Wry and bittersweet, God Said This vividly captures the complexities of a familial reconciliation in the throes of crisis and looks deeply at the meaning of family—Japanese, Southern, and otherwise.

This is the first Yale Drama Series winner chosen by Pulitzer prize–winning playwright Ayad Akhtar, who
describes the play as conveying “a deeply felt sense of the universal—of the perfection of our parents’ flawed
love for each other and for us; for the ways in which the approach of death can order the meaning of a human life.”

Leah Nanako Winkler is a Japanese-American playwright from Kamakura, Japan, and Lexington, Kentucky.
Her plays include Kentucky and Two Mile Hollow. She is the inaugural winner of the Mark O’Donnell Prize.

“Witty and wise, inhabited by a poignant specificity that conveys a deeply felt sense of the universal—for the ways in which the approach of death can order the meaning of a human life.”—Ayad Akhtar
“God Said This is complex and with a hold nothing back honesty about dysfunctional families and the strategies to cope that may ultimately divide the family further. It is the first play in a long time that does not castigate born again Christianity as a coping mechanism. It has emotional generosity.”—Paula Vogel, author of Indecent
“A stunning, painfully complicated, funny, and compassionately rendered story of an American family. I identified with it so deeply and it made me feel more compassion and love for my own family and their struggles. Brava.”—Heidi Schreck, author of What the Constitution Means To Me