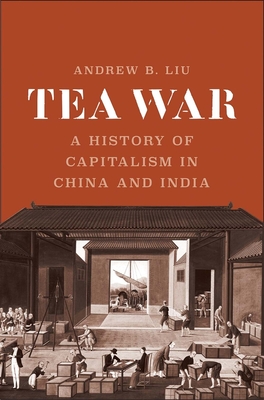 A History of Capitalism in China and India

“Tea War is not only a detailed comparative history of the transformation of tea production in the 19th and early 20th centuries, but it also intervenes in larger debates about the nature of capitalism, global modernity, and global history.”— Alexander F. Day, Occidental College

Tea remains the world’s most popular commercial drink today, and at the turn of the twentieth century, it represented the largest export industry of both China and colonial India. In analyzing the global competition between Chinese and Indian tea, Andrew B. Liu challenges past economic histories premised on the technical “divergence” between the West and the Rest, arguing instead that seemingly traditional technologies and practices were central to modern capital accumulation across Asia. He shows how competitive pressures compelled Chinese merchants to adopt abstract industrial conceptions of time, while colonial planters in India pushed for labor indenture laws to support factory-style tea plantations. Characterizations of China and India as premodern backwaters, he explains, were themselves the historical result of new notions of political economy adopted by Chinese and Indian nationalists, who discovered that these abstract ideas corresponded to concrete social changes in their local surroundings. Together, these stories point toward a more flexible and globally oriented conceptualization of the history of capitalism in China and India.

Praise For Tea War: A History of Capitalism in China and India…

“Liu’s account also shows how a sensitivity to the way the Global South historically experienced capitalism pushes us to rethink what capitalism essentially is. . .[His] analysis enables us to detect the entanglements between anti-imperial nationalism and capitalism in the Global South.”—Yueran Zhang, Jacobin

“Liu’s analysis is thoughtful and based upon a careful study of a specific industry in specific localities...Liu’s views offer a clear and well-structured discussion of the tea industry in both countries, as well as the larger issues of global capitalism and colonialism in the nineteenth and early twentieth centuries.”—Morris Rossabi, Journal of Chinese Studies

Winner of the 2022 Ralph Gomory Prize, sponsored by the Business History Conference

“Tea War is not only a detailed comparative history of the transformation of tea production in the 19th and early 20th centuries, but it also intervenes in larger debates about the nature of capitalism, global modernity, and global history.”— Alexander F. Day, Occidental College

“In Tea War, Andy Liu grapples with the question of how to write the history of capitalism beyond the North Atlantic. His comparative study of two Asian frontier regions presses us to rethink the conventional signposts around which the history of capitalism has conventionally been written. He shows how careful empirical inquiry and social theory can inform each other in innovative and exciting ways.”—Andrew Sartori, New York University

Andrew B. Liu is assistant professor of history at Villanova University, where his research focuses on China, transnational Asia, and the history of capitalism.
Loading...
or
Not Currently Available for Direct Purchase