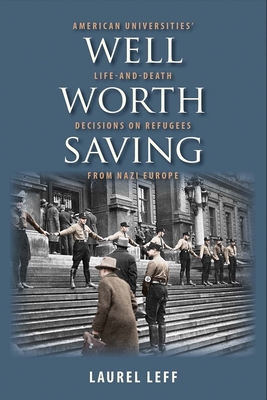 The United States’ role in saving Europe’s intellectual elite from the Nazis is often told as a tale of triumph, which in many ways it was. America welcomed Albert Einstein and Enrico Fermi, Hannah Arendt and Herbert Marcuse, Rudolf Carnap and Richard Courant, among hundreds of other physicists, philosophers, mathematicians, historians, chemists, and linguists who transformed the American academy. Yet for every scholar who survived and thrived, many, many more did not.

To be hired by an American university, a refugee scholar had to be world-class and well connected, not too old and not too young, not too right and not too left, and, most important, not too Jewish. Those who were unable to flee were left to face the horrors of the Holocaust. In this rigorously researched book, Laurel Leff rescues from obscurity scholars who were deemed “not worth saving” and tells the riveting, full story of the hiring decisions universities made during the Nazi era.

“Laurel Leff has turned out another powerful, meticulously researched, and groundbreaking work. As engaging as it is disheartening, Well Worth Saving significantly broadens our understanding of the inadequate response of important segments of American society to the Nazi persecution of European Jewry.”—Rafael Medoff, Israel Journal of Foreign Affairs

"Leff unsettles the prevailing narrative of American higher education as a refuge for European scholars fleeing the Holocaust in this harrowing, deeply researched account. . . . Scholars of the Holocaust, immigration policy, and higher education will find Leff’s exhaustive account enlightening."—Publishers Weekly

"Closely researched and absorbing. . . . I salute Leff for addressing this unwritten history with such a devastating book."—Helen Epstein, Arts Fuse

"Particularly timely when immigration, refugees and anti-Semitism are much in the headlines."—Sandee Brawarsky, Jewish Week/Times of Israel

“Entertaining and accessible, Heard’s discussion will appeal to both scientific and general audiences.” —Publishers Weekly

“This powerfully written, heartbreaking history exposes the terrible price that nativism, antisemitism, narrow-mindedness, and bureaucratic inertia exacted on some of Europe's most learned women and men."—Jonathan D. Sarna, author of American Judaism: A History

“Leff asks us to grapple with a history that is more complicated and less triumphant than the version many of us think we know. The stories she tells of refugee scholars, their allies, and the obstacles they faced within American colleges and universities are important for us to understand.”—Peter Salovey, President of Yale University

“Scrupulously researched, beautifully crafted, and passionately felt, Laurel Leff’s book provides a balanced and sobering account of how the United States, and especially the American academic community, failed to respond aggressively to the plight of European Jewish scholars between 1933 and 1942.”—Richard M. Freeland, author of Academia’s Golden Age

“In this meticulously researched book, Laurel Leff recounts the dismal history of the many brilliant researchers who, unlike the Albert Einsteins and Hannah Arendts, were not rescued from the Nazis. Leff gives names, faces and biographies to these forgotten victims of the Nazi madness. Her beautifully written book is an act of belated rescue.”—David Biale, author of Gershom Scholem

“Well Worth Saving is a disturbing book. While there were some heroes in the American academic scene during the 1930s and 1940s, there were many professors and university administrators who, despite knowing the consequences, turned their backs on European scholars who were desperately trying to escape from Europe. This book will leave many American academics shaking their heads in shame at the legacy of their institutions.”—Deborah E. Lipstadt, author of Antisemitism Here and Now

Laurel Leff is associate director of the Jewish Studies Program and associate professor of journalism at Northeastern University. She is the author of Buried by The Times: The Holocaust and America’s Most Important Newspaper.
Loading...
or support indie stores by buying on