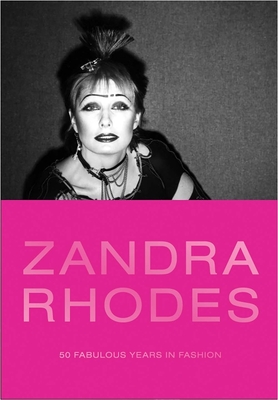 Celebrating decades of achievement by one of the foremost names in British fashion, whose vitality and influence continue to shine

Zandra Rhodes provides a luscious documentary of this leading British designer, spanning her 50-year career in fashion and textile design. The book showcases not only Rhodes’s work but also her vivid personality and creative energy. Both a fashion trailblazer and a consummate textile designer, she has influenced the work of contemporary labels such as Mary Katrantzou and Alice Temperley. The book honors the centrality of textile design in Rhodes’s work, while exploring the versatility of her imagination throughout her long career; contributors include Pierpaolo Piccioli (creative director of Valentino), Suzy Menkes (editor of Vogue International), and celebrated fashion designers Anna Sui and Rajeev Sethi. It also commemorates the 50th anniversary of the house of Zandra Rhodes, a British-owned and -made brand, and Rhodes’s successful establishment of the Fashion and Textile Museum in London.

Dennis Nothdruft is head of exhibitions at the Fashion and Textile Museum, London. Zandra Rhodes is a British fashion and textile designer.
Loading...
or
Not Currently Available for Direct Purchase