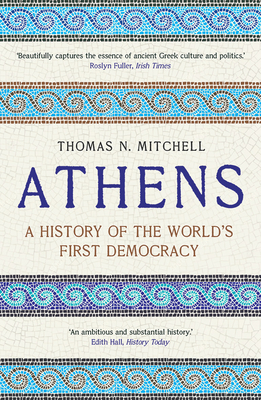 A History of the World's First Democracy

A history of the world’s first democracy from its beginnings in Athens circa fifth century B.C. to its downfall 200 years later

The first democracy, established in ancient Greece more than 2,500 years ago, has served as the foundation for every democratic system of government instituted down the centuries. In this lively history, author Thomas N. Mitchell tells the full and remarkable story of how a radical new political order was born out of the revolutionary movements that swept through the Greek world in the seventh and sixth centuries B.C., how it took firm hold and evolved over the next two hundred years, and how it was eventually undone by the invading Macedonian conquerors, a superior military power.

Mitchell’s superb history addresses the most crucial issues surrounding this first paradigm of democratic governance, including what initially inspired the political beliefs underpinning it, the ways the system succeeded and failed, how it enabled both an empire and a cultural revolution that transformed the world of arts and philosophy, and the nature of the Achilles heel that hastened the demise of Athenian democracy.

Praise For Athens: A History of the World's First Democracy…

"This is an attractive and stimulating study of classical Athens and its democracy, and of what we might learn from it."—P.J. Rhodes, Gnomon


'Thomas Mitchell has written a clear, lively and instructive account of the world’s first democracy in ancient Athens. He has mastered the latest scholarship in the field and put it to good use in interpreting the ancient sources and demonstrating its character and importance in shaping democratic thought and institutions throughout the millennia.  The acuteness and balance of his judgments do justice to the strengths and weaknesses of such a regime, even as his belief in democracy ancient and modern enlivens analysis.  All is set forth in an engaging style that will bring pleasure as well as enlightenment to his grateful readers.' - Donald Kagan, author of The Peloponnesian War

'The story of democracy in classical Athens continues to be a story that raises acute questions about the principles and practices of democracies today. Thomas Mitchell's book explores that story with a light touch deeply embedded in the testimony of ancient writers and the research of modern scholars, offering an introduction that reveals the importance of understanding what Athenians thought about what they were doing, as well as the importance of what they were doing. This is the ideal foundation on which to build a critical appreciation of what Athenian democracy involved.' - Robin Osborne, author of Greece in the Making 1200–479 BC

'Democracy’s Beginning combines careful research with a passionate conviction in the potential of true democracy, as a form of government and as a way of life. Thomas Mitchell presents the full story of the rule of the people in ancient Athens, from early beginnings, through the imperial era of Pericles, to the culmination of participatory citizenship in the age of Plato and Aristotle. He warns us of the dangers of over-enthusiastic democratic foreign policy and notes the failings of Greek treatment women, slaves, and foreigners. But all the while he focuses our attention on how government of, for and by the people once did — and might again — produce a fairer, freer and more equal society.' - Josiah Ober, author of The Rise and Fall of Classical Greece

"Lucid, sophisticated and elegant, Mitchell's fresh contribution to the field makes Athenian political history come alive and really matter. While its specific focus is on ancient Athens, the book never loses sight of how the study of the Athenian democracy enriches our understanding of modern democracies, and it leaves one with a sense of how the study of historical antecedents might help guide how we organize our societies in our own, and future, time."—Ralph Rosen, University of Pennsylvania

'Democratic deficit is on everyone's lips these days, but Thomas Mitchell's lively and comprehensive new study harks back to the days of democratic surplus, when democracy - both the word and the thing - was young. Reading Democracy's Begnnining should be an inspiriting as well as an invigorating experience.' - Paul Cartledge, author of Ancient Greece: A History in Eleven Cities

Thomas N. Mitchell is professor and former provost and president of Trinity College Dublin and chair of its School of Classics. He lives in Dublin.
Loading...
or
Not Currently Available for Direct Purchase