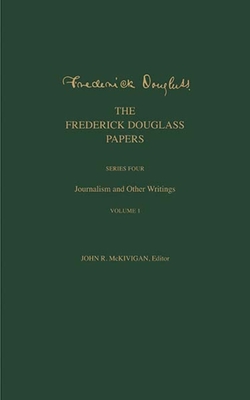 Launching the fourth series of The Frederick Douglass Papers, designed to introduce readers to the broadest range of Frederick Douglass’s writing, this volume contains sixty-seven pieces by Douglass, including articles written for North American Review and the New York Independent, as well as unpublished poems, book transcriptions, and travel diaries. Spanning from the 1840s to the 1890s, the documents reproduced in this volume demonstrate how Douglass’s writing evolved over the five decades of his public life. Where his writing for publication was concerned mostly with antislavery advocacy, his unpublished works give readers a glimpse into his religious and personal reflections. The writings are organized chronologically and accompanied by annotations offering biographical information as well as explanations of events mentioned and literary or historical allusions.

John R. Kaufman McKivigan is Mary O'Brien Gibson Professor of History at Indiana University–Purdue University Indianapolis. He has served as editor for the Frederick Douglass Papers Series since 1992.
Loading...
or support indie stores by buying on