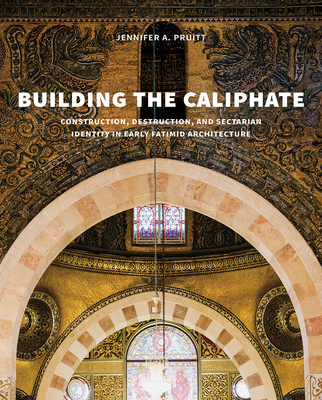 This groundbreaking study investigates the early architecture of the Fatimids, an Ismaili Shi‘i Muslim dynasty that dominated the Mediterranean world from the 10th to the 12th century. This period, considered a golden age of multicultural and interfaith tolerance, witnessed the construction of iconic structures, including Cairo’s al-Azhar and al-Hakim mosques and crucial renovations to Jerusalem’s Dome of the Rock and Aqsa Mosque. However, it also featured large-scale destruction of churches under the notorious reign of al-Hakim bi-Amr Allah, most notably the Church of the Holy Sepulcher in Jerusalem. Jennifer A. Pruitt offers a new interpretation of these and other key moments in the history of Islamic architecture, using newly available medieval primary sources by Ismaili writers and rarely considered Arabic Christian sources. Building the Caliphate contextualizes early Fatimid architecture within the wider Mediterranean and Islamic world and demonstrates how rulers manipulated architectural form and urban topographies to express political legitimacy on a global stage.

“A highly scholarly and perceptive book about a complicated, enigmatic dynasty: the Fatimids. The author explains the meaning of early Fatimid architecture in Tunisia and Egypt by probing their sectarian identity and bid for political legitimacy.”—D. Fairchild Ruggles, University of Illinois, Urbana-Champaign

“This book offers a new reading of Fatimid architecture and urbanism, using texts, archaeology, and monuments to explore artistic creation—and destruction—against a backdrop of contested medieval religious identities and the negotiation of sectarian differences.”—Glaire Anderson, University of Edinburgh

Jennifer A. Pruitt is assistant professor of Islamic art history at the University of Wisconsin–Madison.