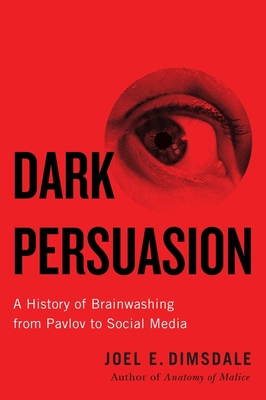 A History of Brainwashing from Pavlov to Social Media

“Riveting. . . . Dimsdale . . . shows how the art of dark persuasion a generation ago led almost inevitably to today’s misinformation, cyberbullying and cultlike behavior on the Internet.”—Dina Temple-Raston, Washington Post

This gripping book traces the evolution of brainwashing from its beginnings in torture and religious conversion into the age of neuroscience and social media. When Pavlov introduced scientific approaches, his research was enthusiastically supported by Lenin and Stalin, setting the stage for major breakthroughs in tools for social, political, and religious control.

Tracing these developments through many of the past century’s major conflagrations, Dimsdale narrates how when World War II erupted, governments secretly raced to develop drugs for interrogation. Brainwashing returned to the spotlight during the Cold War in the hands of the North Koreans and Chinese. In response, a huge Manhattan Project of the Mind was established to study memory obliteration, indoctrination during sleep, and hallucinogens. Cults used the techniques as well. Nobel laureates, university academics, intelligence operatives, criminals, and clerics all populate this shattering and dark story—one that hasn’t yet ended.


Praise For Dark Persuasion: A History of Brainwashing from Pavlov to Social Media…

“Riveting. . . . Dimsdale takes readers through it all, animating the journey with a clear, energetic writing style that shows how the art of dark persuasion a generation ago led almost inevitably to today’s misinformation, cyberbullying and cultlike behavior on the Internet.”—Dina Temple-Raston, Washington Post

“Brainwashing [is] . . . a tool exploited by cultists and religious leaders; and ultimately a phenomenon that eludes easy definition while growing ever harder to ignore. . . . Throughout Dark Persuasion, Dimsdale shows how the idea of brainwashing has been used to justify . . . not the intricate manipulation of another person’s thoughts but simple abuse, whether conducted by the government or by the leaders of a cult.”—Jo Livingstone, New Republic

“Dimsdale is a brilliantly concise and insightful guide . . . and the book is as energetic and enjoyable as his previous one. . . . Dark Persuasion was intended as a historical overview of the development of brainwashing. It achieves that goal wonderfully.”—Steve Donoghue, Open Letters Review

Shortlisted for the 2022 William James Award, sponsored by the APA

“In an age with deep concern that we are being manipulated by artificial intelligence and algorithms, this is an important topic and a timely, well-written book. The question of how large groups of seemingly reasonable people come to hold obviously unreasonable beliefs is one of the deepest questions of our age.”—Tanya Luhrmann, author of When God Talks Back

“This book is a fascinating account of coercive persuasion from Pavlov to today's mass believers in conspiracy. Dimsdale’s sobering account makes the reader wonder if what anti-vaxxers, Big Lie believers, and victims of brainwashing techniques have in common is the story told in this book about the socialization of cognition and emotion. Provocative and eye-opening.”—Arthur Kleinman, author of The Soul of Care

“A book for our times—timely, compelling, provocative, smart, and ultimately hopeful, in offering a means to our own protection from the forces of darkness.”—Philippe Sands, author of East West Street

“A remarkable history of the historical background to brainwashing in the twentieth century. This book should be read by anyone interested in how people can believe in something dramatically different from their own observations.”—Thomas Wise, Johns Hopkins School of Medicine

“Captivating. Illuminating. Frightening. Secrets revealed and myths debunked on the past century’s practices of brainwashing told from the perspective of an experienced psychiatrist and a gifted narrator. A journey never to be forgotten.”—Stephen M. Stahl, Neuroscience Education Institute

Joel E. Dimsdale is Distinguished Professor Emeritus in the Department of Psychiatry at University of California, San Diego. He consults widely to government agencies and is the author of numerous other works, including Anatomy of Malice: The Enigma of the Nazi War Criminals. He lives in San Diego, CA.
Loading...
or support indie stores by buying on