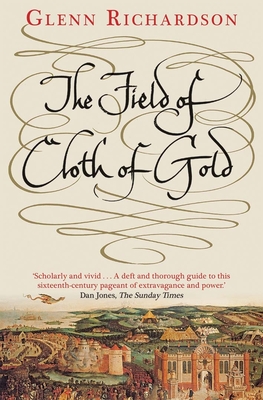 The Field of Cloth of Gold (Paperback)

Glenn Richardson provides the first history in more than four decades of a major Tudor event: an extraordinary international gathering of Renaissance rulers unparalleled in its opulence, pageantry, controversy, and mystery.
Throughout most of the late medieval period, from 1300 to 1500, England and France were bitter enemies, often at war or on the brink of it. In 1520, in an effort to bring conflict to an end, England’s monarch, Henry VIII, and Francis I of France agreed to meet, surrounded by virtually their entire political nations, at “the Field of Cloth of Gold.” In the midst of a spectacular festival of competition and entertainment, the rival leaders hoped to secure a permanent settlement between them, as part of a European-wide “Universal Peace.” Richardson offers a bold new appraisal of this remarkable historical event, describing the preparations and execution of the magnificent gathering, exploring its ramifications, and arguing that it was far more than the extravagant elitist theater and cynical charade it historically has been considered to be.

Praise For The Field of Cloth of Gold…

'This is an impressive piece of work. Its great strength is the author's use of original French material, which has enabled Richarson to reconstruct the French preparations in the same detail as the English, and to explore the cultural significance of the Field for Renaissance diplomacy. Richardson is right to conclude that it was seriously intended, and not merely a jeu d'espirit or an excuse for conspicuous consumption.' - David Loades, author of The Tudors: History of a Dynasty
'Glenn Richardson has meticulously scoured the archives, in both French and English, to provide a sparkling new account of the Field of Cloth of Gold as an extraordinary demonstration of ostentatious rivalry. Richardson notes that there has been no new history of the Field for forty years; after his definitive, detailed and careful study, there need be no new one for many years to come.' - Suzannah Lipscomb, author of A Visitor's Companion to Tudor England