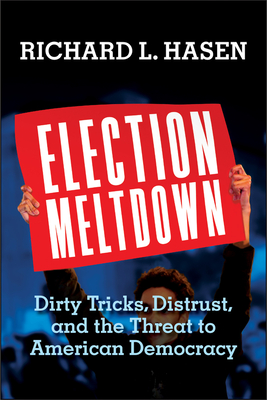 Dirty Tricks, Distrust, and the Threat to American Democracy

“A hard-hitting critique of the American election process as timely as it is frightening. . . . Required reading for legislators and voters.”—Kirkus Reviews, Starred Review

"A must-read. It's well-written, easy to read, informative and fair. But it doesn't pull punches."—Mark Caputo, on Twitter


As the 2020 presidential campaign begins to take shape, there is widespread distrust of the fairness and accuracy of American elections. In this timely and accessible book, Richard L. Hasen uses riveting stories illustrating four factors increasing the mistrust. Voter suppression has escalated as a Republican tool aimed to depress turnout of likely Democratic voters, fueling suspicion. Pockets of incompetence in election administration, often in large cities controlled by Democrats, have created an opening to claims of unfairness. Old‑fashioned and new‑fangled dirty tricks, including foreign and domestic misinformation campaigns via social media, threaten electoral integrity. Inflammatory rhetoric about “stolen” elections supercharges distrust among hardcore partisans.

Taking into account how each of these threats has manifested in recent years—most notably in the 2016 and 2018 elections—Hasen offers concrete steps that need to be taken to restore trust in American elections before the democratic process is completely undermined. This is an indispensable analysis, from the nation’s leading election-law expert, of the key threats to the 2020 American presidential election.


Praise For Election Meltdown: Dirty Tricks, Distrust, and the Threat to American Democracy…

“Extremely timely...There are a lot of specific problems and I think [Hasen’s] got a handle on what those issues are and how to stay ahead of them.”—Pete Buttigieg, The Guardian [Interview]

“A hard-hitting critique of the American election process as timely as it is frightening. In a slim, cogently argued analysis, legal scholar points to four dangers threatening the voting process in 2020 and beyond . . . Required reading for legislators and voters.”—Kirkus Reviews, Starred Review

“[A] bracing and comprehensive inquiry.”—Publishers Weekly

"Election Meltdown . . . is a must-read. It's well-written, easy to read, informative and fair. But it doesn't pull punches."—Mark Caputo, on Twitter

“There is no better work describing the astonishing attacks on the most basic element of our democracy—voting—nor a more hopeful account of the changes that could fix it. If there is a plan to establish democracy in America, this book is a central chapter.”—Lawrence Lessig, author of They Don’t Represent Us

“Hasen’s informative and important book makes a compelling case for long-term, systemic reform of our elections."—Trevor Potter, Founder and President of the Campaign Legal Center

"Voters losing faith in the integrity of elections is one of the greatest risks any democracy faces. Rick Hasen chronicles why that risk is increasing in the United States and what to do about it before it’s too late."—Richard H. Pildes, author of The Law of Democracy

"Richard Hasen’s new book is well named, because unless we pay close attention and act fast, an election meltdown may be exactly what we get in 2020. If you want to see honest, fair elections in 2020 and beyond, you must read this book—and then act."—Larry J. Sabato, Director, University of Virginia Center for Politics

Richard L. Hasen is Chancellor’s Professor of Law and Political Science at the University of California, Irvine. In 2013 he was named one of the 100 most influential lawyers in America by the National Law Journal, and his previous books include Voting Wars, Plutocrats United, and The Justice of Contradictions.