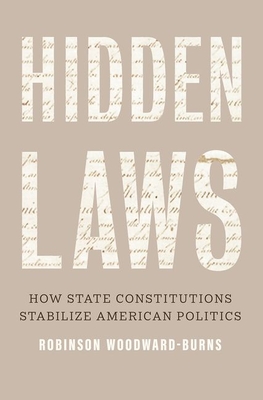 
“On the basis of exhaustive research into state politics, Robinson Woodward-Burns makes a compelling case that the celebrated stability of the U.S. Constitution rests in part on how the states have dealt with constitutional issues. An original and deeply illuminating analysis of the dynamics of America’s emphatically federal constitutionalism.”--Rogers Smith, University of Pennsylvania


“Hidden Laws is a truly important book that reminds us that the American constitutional order comprises far more than the singular United States Constitution and the national government. Robinson Woodward-Burns writes that 'almost all modern constitutional reform occurs at the state level.' This illuminating insight deserves serious discussion by anyone interested in the future of American democracy.”--Sanford Levinson, author of Framed: America’s 51 Constitutions and the Crisis of Governance

Robinson Woodward-Burns is assistant professor of political science at Howard University.
Loading...
or
Not Currently Available for Direct Purchase