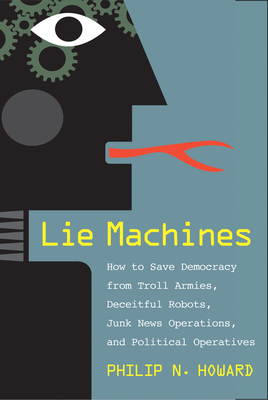 How to Save Democracy from Troll Armies, Deceitful Robots, Junk News Operations, and Political Operatives

Technology is breaking politics—what can be done about it?

Lie Machines is full of riveting behind-the-scenes stories from the world’s biggest and most damagingly successful misinformation initiatives—including those used in Brexit and U.S. elections. Howard not only shows how these campaigns evolved from older propaganda operations but also exposes their new powers, gives us insight into their effectiveness, and explains how to shut them down.

Praise For Lie Machines: How to Save Democracy from Troll Armies, Deceitful Robots, Junk News Operations, and Political Operatives…

"Could not be more timely and important; and its central premise—that this new stage in the evolution of the web has political implications that will match or even outstrip its commercial ones—is both striking and convincing."—Felix Martin, Financial Times, praise for Pax Technica: How the Internet of Things May Set Us Free or Lock Us Up

"Lie Machines is an important account of the corruption of online information flows, offering up a bounty of lively, action-oriented reflections on the vulnerabilities inherent in today's digital communications architecture."—Jonathan Zittrain, George Bemis Professor of International Law and Professor of Computer Science, Harvard University


“Lie Machines presents Howard’s cutting-edge research on disinformation and computational propaganda in a vivid, compelling manner. The book is a tour de force analysis of grave threats to democracy, and how to defuse them.”— Frank Pasquale, author of The Black Box Society


“Lie Machines takes on one of the great challenges of the digital age. Refusing to wallow in the dystopia of it all, Howard produces a must-read for the moment and a blueprint for the future.”—David Kaye, United Nations Special Rapporteur on Freedom of Expression

“A compelling read. Howard relates a complex subject in simple and convincing terms, producing a prescient and socially significant work.”—Zizi Papacharissi, author of A Private Sphere: Democracy in a Digital Age

Philip N. Howard is director of the Oxford Internet Institute and the author of nine books, including Pax Technica: How the Internet of Things May Set Us Free or Lock Us Up, which was praised in the Financial Times as “timely and important.” He is a frequent commentator on the impact of technology on political life, contributing to the New York Times, Financial Times, and other media outlets.
Loading...
or
Not Currently Available for Direct Purchase