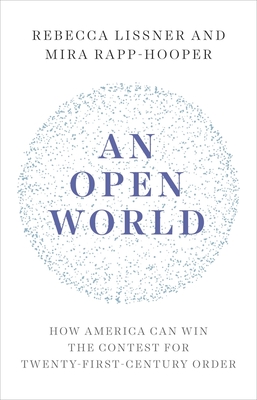 How America Can Win the Contest for Twenty-First-Century Order

This ambitious and incisive book presents a new vision for American foreign policy and international order at a time of historic upheaval. The United States global leadership crisis is not a passing shock created by the Trump presidency or COVID-19, but the product of forces that will endure for decades. Amidst political polarization, technological transformation, and major global power shifts, Lissner and Rapp-Hooper convincingly argue, only a grand strategy of openness can protect American security and prosperity despite diminished national strength. Disciplined and forward-looking, an openness strategy would counter authoritarian competitors by preventing the emergence of closed spheres of influence, maintaining access to the global commons, supporting democracies without promoting regime change, and preserving economic interdependence. The authors provide a roadmap for the next president, who must rebuild strength at home while preparing for novel forms of international competition. Lucid, trenchant, and practical,An Open World is an essential guide to the future of geopolitics.


Praise For An Open World: How America Can Win the Contest for Twenty-First-Century Order…

“Rebecca Lissner and Mira Rapp-Hooper’s An Open World is a timely exploration of the key challenges to world order in the twenty-first century. Amid unprecedented geopolitical and technological disruption, this work is a crucial contribution to the most important conversation of our time.”—Henry A. Kissinger

"Mandatory reading. At a moment of unprecedented change and upheaval, Rapp-Hooper and Lissner provide fresh thinking and a clear guide for United States leadership in a renewed and open 21st-Century international order."—Jim Mattis, former Secretary of Defense

“Rebecca Lissner and Mira Rapp-Hooper offer a compelling new strategy of openness as the only way to recover and protect U.S. prosperity and security going forward.  Their ambitious vision is smart, hopeful and urgent -- essential reading for anyone interested in how the United States will fare in this new world.”—Michèle Flournoy, Former Undersecretary of Defense for Policy

“Lissner and Rapp-Hooper are among the best of a new generation of grand strategic thinkers.  In Open World, they offer a bold vision of a post-Trump international order that reasserts American leadership and reestablishes partnerships and multilateral institutions that advance its interests and values.”—G. John Ikenberry, Princeton University

“This insightful, compelling, and fundamentally optimistic book is indispensable reading for our next generation of leaders, and for anyone interested in foreign policy. Lissner and Rapp-Hooper do an extraordinary job of situating their rich analysis of the causes and consequences of the existing international order in historical, political, and economic context, and assess the world as it is with clarity and thoughtfulness to develop a novel strategic framework for U.S. leadership.”— Avril Haines, former Principal Deputy National Security Advisor and former Deputy Director of the Central Intelligence Agency

Rebecca Lissner is an assistant professor at the U.S. Naval War College. Mira Rapp‑Hooper is Stephen A. Schwarzman Senior Fellow for Asia Studies at the Council on Foreign Relations and Senior Fellow at the Yale Law School’s China Center.
Loading...
or support indie stores by buying on