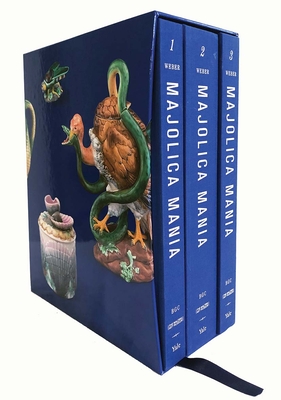 Transatlantic Pottery in England and the United States, 1850–1915

Colorful, wildly imaginative, and technically innovative, majolica was functional and aesthetic ceramic ware. Its subject matter reflects a range of 19th-century preoccupations, from botany and zoology to popular humor and the macabre. Majolica Mania examines the medium’s considerable impact, from wares used in domestic settings to monumental pieces at the World’s Fairs. Essays by international  experts address the extensive output of the originators and manufacturers in England—including Minton, Wedgwood, and George Jones—and the migration of English craftsmen to the U.S. New research including information on important American makers in New York, Baltimore, and Philadelphia is also featured. Fully illustrated, the book is enlivened by new photography of pieces from major museums and private collections in the U.S. and Great Britain.


Praise For Majolica Mania: Transatlantic Pottery in England and the United States, 1850–1915…

“The two-part tome, which shows often botanically themed majolica ceramics, is sure to serve as an excellent guide for anyone looking to learn more about the medium.”—Madeleine Luckel, Architectural Digest

Susan Weber is director and founder of the Bard Graduate Center.
Loading...
or support indie stores by buying on
(This book is on backorder)