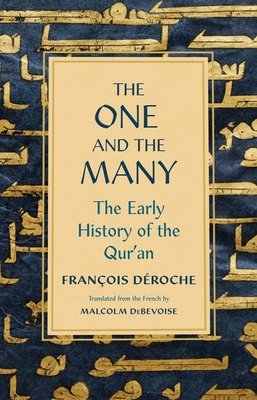 The One and the Many

The Early History of the Qur'an

“There is no one better placed than François Déroche to write the history—and tell the story—of how the Quran went from words uttered by Muhammad to inviolable canonical scripture. This is a meticulous, lucid, and fascinating book.”—Shawkat Toorawa, Yale University

According to Muslim dogma, the recited and written text of the Qur’an as we know it today scrupulously reflects the divine word as it was originally sent down to Muhammad. An examination of early Islamic sources, including accounts of prophetic sayings, all of them compared with the oldest Qur’anic manuscripts, reveal that plurality was in fact the outstanding characteristic of the genesis and transmission of the Qur’an, both textually and orally.

By piecing together information about alternative wordings eliminated from the canonical version that gradually came to be imposed during the first centuries of Islam, François Déroche shows that the Qur’an long remained open to textual diversity. Not only did the faithful initially adopt a flexible attitude toward the Qur’anic text, an attitude strikingly at odds with the absolute literalism later enforced by Muslim orthodoxy, but Muhammad himself turns out to have been more concerned with the meaning than the letter of the divine message.

Praise For The One and the Many: The Early History of the Qur'an…

“With four decades of painstaking manuscript research behind him, there is no one better placed than François Déroche to write the history—and tell the story—of how the Quran went from words uttered by Muhammad to inviolable canonical scripture. This is a meticulous, lucid, and fascinating book.”—Shawkat Toorawa, Yale University


“A masterful and clearly written synthesis of Déroche’s pioneering and pathbreaking scholarship on early Islamic manuscripts over the past three decades.”—David Stephan Powers, Cornell University


“The author engages in true investigation . . . connecting the Qur’anic text, the theory of ‘readings,’ and different layers of tradition in their historical context with his observations from manuscripts of the seventh and eighth centuries. He thus shows that, from the time of the Prophet until about the tenth century, a plurality was at work in various ways, revealing an approach to the Qur’an and its transmission very different from the literalism that has been observed.”—Jean-Marc Balhan, Revue Études


“A summary of the author’s life’s work: Déroche is a master of manuscripts, and very artfully takes the reader through the earliest ones.”—David Cook, Rice University

François Déroche, professor at the Collège de France, is the world’s foremost authority on early Qur’anic manuscripts and a leading scholar of the history of the Arabic book. Malcolm DeBevoise has translated more than forty works from French and Italian in every branch of scholarship. He is a three-time winner of the French-American Foundation translation prize for nonfiction.
Loading...
or support indie stores by buying on