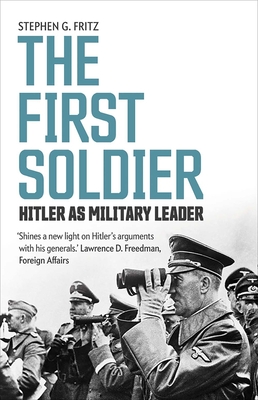 After Germany’s humiliating World War II defeat, numerous German generals published memoirs claiming that their country’s brilliant military leadership had been undermined by the Führer’s erratic decision making. The author of three highly acclaimed books on the era, Stephen Fritz upends this characterization of Hitler as an ill-informed fantasist and demonstrates the ways in which his strategy was coherent and even competent.

That Hitler saw World War II as the only way to retrieve Germany’s fortunes and build an expansionist Thousand-Year Reich is uncontroversial. But while his generals did sometimes object to Hitler’s tactics and operational direction, they often made the same errors in judgment and were in agreement regarding larger strategic and political goals. A necessary volume for understanding the influence of World War I on Hitler’s thinking, this work is also an eye-opening reappraisal of major events like the invasion of Russia and the battle for Normandy.

Praise For The First Soldier: Hitler as Military Leader…

“Perhaps the best account we have to date of Hitler’s military leadership. It shows a scrupulous and imaginative historian at work and will cement Fritz’s reputation as one of the leading historians of the military conflicts generated by Hitler’s Germany.”—Richard Overy, author of The Bombing War

“Magnificent. Hitler emerges as a complex and nuanced military leader who cannot simply be dismissed as the dogmatic ideologue or the corporal in command. Original, insightful and authoritative Fritz’s latest work is something I will return to again and again.”—David Stahel, author of The Battle for Moscow

“Cuts a swathe through the reconstituted arguments of countless other books about Hitler. Meticulously researched and adopting a thoroughly readable style, Fritz offers profound new insights about Hitler as commander. This is a volume which should serve as a warning to strategic leaders who become blinkered by ideology, self-absorbed and neglect the requirements of successful leadership.”—Lloyd Clark, author of Blitzkrieg

Stephen G. Fritz is professor at East Tennessee State University. His books include Frontsoldaten: The German Soldier in World War II and Ostkrieg: Hitler’s War of Extermination in the East. He lives in Johnson City, TN.
Loading...
or
Not Currently Available for Direct Purchase