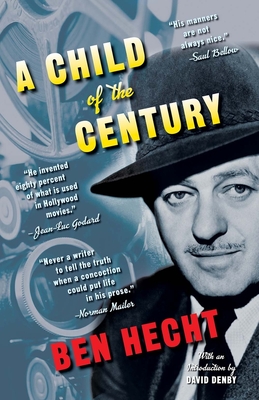 A Child of the Century

A classic memoir by one of the greatest American screenwriters, Ben Hecht

Named to Time’s list of All-Time 100 Nonfiction Books, which deems it “the un-put-downable testament of the era’s great multimedia entertainer.”

A Child of the Century, Ben Hecht’s autobiographical memoir, was first published in 1954 to great critical acclaim. Hecht offers philosophical meditations on the nature of God and the self as well as keen, firsthand portraits of big-city newsrooms, postwar Germany, 1920s New York intellectuals and artists, and golden-age Hollywood. He shares anecdotes from his days working with Hollywood legends such as the Marx brothers, authors Sherwood Anderson and Dorothy Parker, actress Fanny Brice, and producer David O. Selznick. With a new introduction by David Denby, this reissued volume will introduce Hecht and his work to a new generation of readers.


Praise For A Child of the Century…

Ben Hecht (1893–1964) was an American screenwriter (Scarface,The Front Page, Notorious), reporter, playwright, journalist, and novelist. According to Pauline Kael, he was “the greatest American screenwriter.” David Denby is the author of Great Books, American Sucker, Snark, and Do the Movies Have a Future? He has been a staff writer and film critic at The New Yorker since 1998.
Loading...
or
Not Currently Available for Direct Purchase