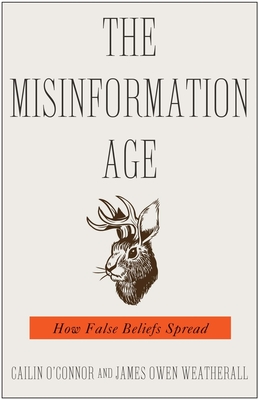 The social dynamics of “alternative facts”: why what you believe depends on who you know

“Empowering and thoroughly researched, this book offers useful contemporary analysis and possible solutions to one of the greatest threats to democracy.”—Kirkus Reviews

Why should we care about having true beliefs? And why do demonstrably false beliefs persist and spread despite bad, even fatal, consequences for the people who hold them?

Philosophers of science Cailin O’Connor and James Weatherall argue that social factors, rather than individual psychology, are what’s essential to understanding the spread and persistence of false beliefs. It might seem that there’s an obvious reason that true beliefs matter: false beliefs will hurt you. But if that’s right, then why is it (apparently) irrelevant to many people whether they believe true things or not?

The Misinformation Age, written for a political era riven by “fake news,” “alternative facts,” and disputes over the validity of everything from climate change to the size of inauguration crowds, shows convincingly that what you believe depends on who you know. If social forces explain the persistence of false belief, we must understand how those forces work in order to fight misinformation effectively.


Praise For The Misinformation Age: How False Beliefs Spread…

“The Misinformation Age covers big subjects like truth and the fate of the species” —Jennifer Szalai, International New York Times

“Empowering and thoroughly researched, this book offers useful contemporary analysis and possible solutions to one of the greatest threats to democracy.”—Kirkus Reviews

“[The authors] deftly apply sociological models to examine how misinformation spreads among people and how scientific results get misrepresented in the public sphere. They offer scientific case studies—the discovery that CFCs were responsible for the ozone hole in the 1980s, for example—to explore the question of what constitutes truth and to consider the role that information plays in a healthy democracy.”—Andrea Gawrylewski, Scientific American

“A notable new volume . . .The Misinformation Age explains systematically how facts are determined and changed—whether it is concerning the effects of vaccination on children or the Russian attack on the integrity of the electoral process.”—Roger I. Abrams, New York Journal of Books

"It’s a good read on a very important subject, definitely worth exploring."—Hugh Taylor, Journal of Cyberpolicy

"Engaging and sophisticated. . . . The Misinformation Age captures the threat posed by misinformation in the current political moment."—Steven Slomin, American Scientist

“An important book for an era of weaponized information.”—George Musser, contributing editor, Scientific American and Nautilus

"Fake news has revealed a dark side of networks: an almost unstoppable ability to spread false and misleading information, changing people's perception of reality and shaking the political establishment. The Misinformation Age is a timely, engaging narrative of how this happened and how the mix of fake news and networks is changing our world."—Albert-László Barabási, author of Linked: The New Science of Networks

"In this perilous moment—when knowledge is powerfully eroded by new and effective campaigns of misinformation—O’Connor and Weatherall offer a critically important philosophical defense of evidence, facts, and above all, the truth."—Allan M. Brandt, Harvard University

“The Misinformation Age is the best book I've read on why the fake-news epidemic is afflicting us and what we can do about it. It offers in-depth reporting and provocative analysis delivered in lively prose, a rare combination.”—John Horgan, director of the Center for Science Writings, Stevens Institute of Technology