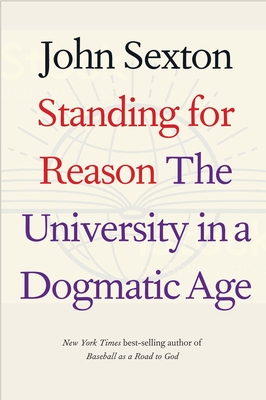 The University in a Dogmatic Age

John Sexton argues that over six decades, a “secular dogmatism,” impenetrable by dialogue or reason, has come to dominate political discourse in America. Political positions, elevated to the status of doctrinal truths, now simply are “revealed.” Our leaders and our citizens suffer from an allergy to nuance and complexity, and the enterprise of thought is in danger. Sexton sees our universities, the engines of knowledge and stewards of thought, as the antidote, and he describes the policies university leaders must embrace if their institutions are to serve this role. Acknowledging the reality of our increasingly interconnected world—and drawing on his experience as president of New York University when it opened campuses in Abu Dhabi and Shanghai—Sexton advocates for “global network universities” as a core aspect of a new educational landscape and as the crucial foundation-blocks of an interlocking world  characterized by “secular ecumenism.”

John Sexton is president emeritus, dean emeritus, and Benjamin Butler Professor of Law at New York University. His previous books include the New York Times bestseller Baseball as a Road to God and Redefining the Supreme Court’s Role.

Praise For Standing for Reason: The University in a Dogmatic Age…

"The book warmly and humbly renders the turning points of his life as a way of contextualizing Sexton’s fears about our present."—New Yorker
"A forceful argument on behalf of the modern university. . . . Having established himself as a visionary when he was president of NYU, Sexton argues that a university that returns to basic principles and extends its horizons offers a remedy to the madness of our current political discourse. . . . Sexton clearly shows how less shouting and more listening can lead to a reclaiming of a lost middle ground.”—Kirkus Reviews
“This book is a very positive presentation of key elements in the future of universities.” –J.T. Rosenthal, Choice
"John Sexton, recently retired president of New York University, moves beyond . . . formulaic encomia to offer a clear description of reason in action as a cure for the mindless dogmatism that infects us in the age of Twitter."—George Dennis O'Brien, Commonweal
“One of the leading educators of our time provides an incisive analysis of the collapse of political discourse, and offers a path forward—with our universities charting the course to more meaningful dialogue as the antidote. The result is a book that gives us hope for the future.”—Hillary Rodham Clinton
“I did not realize how hungry I was for such unrelentingly positive witness. John Sexton’s book is a stirring corrective to the rising tide of darkness, negative energy, and even cynicism. As political America cowers before "the other," whether immigrants from abroad or persons of color long at home on these shores, this celebration of differences rings with power. John invites the reader to lift the gaze up from the clutter and discouragement of the present moment (especially here in the US) and see the shape of a possible future, one full of promise.”—James Carroll, author of Constantine’s Sword
“With this wonderful book, John Sexton offers a lifetime’s worth of wisdom and a challenge to leaders everywhere. Every page radiates with John’s humor, his decency, and his fundamental good sense. This is an urgently important book, and it could not be more timely.”—Vartan Gregorian, former President of Brown, now President of the Carnegie Foundation
“In this challenging and deeply inspiring book, John Sexton has given us a vision of the university of the future as a guardian of civil debate, nuanced complexity and global intercultural understanding in a world urgently in need of all three. A fine credo from one of the master architects of higher education in our time.”—Rabbi Lord Jonathan Sacks, former Chief Rabbi of the United Kingdom, author of The Dignity of Difference
“John Sexton has been a remarkable university president. The enlightened pages of this book are a product of his thought, experience, and, above all, his passion about the future of universities.”—Robert Berdahl, former president of the University of Texas at Austin, the University of California (Berkeley), and the Association of American Universities (53)