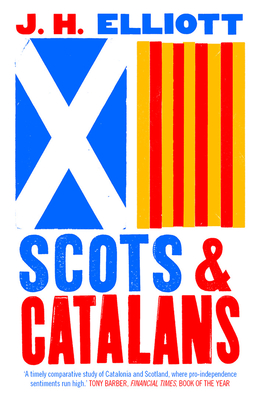 A distinguished historian of Spain and Europe provides an enlightening account of the development of nationalist and separatist movements in contemporary Catalonia and Scotland. This first sustained comparative study uncovers the similarities and the contrasts between the Scottish and Catalan experiences across a five-hundred-year period, beginning with the royal marriages that brought about union with their more powerful neighbors, England and Castile respectively, and following the story through the centuries from the end of the Middle Ages until today’s dramatic events.

J. H. Elliott examines the political, economic, social, cultural, and emotional factors that divide Scots and Catalans from the larger nations to which their fortunes were joined. He offers new insights into the highly topical subject of the character and development of European nationalism, the nature of separatism, and the sense of grievance underlying the secessionist aspirations that led to the Scottish referendum of 2014, the illegal Catalan referendum of October 2017, and the resulting proclamation of an independent Catalan republic.

Praise For Scots and Catalans: Union and Disunion…

“For a greater understanding of Scotland and Catalonia within a wider crisis of mainstream politics, this thought-provoking book is an ideal place to start.”—Donald MacRaild, THES

“Scots and Catalans is a stimulating history book, but most of all it is a political polemic. It aims to show how the two independence movements are based on false interpretations of history.”—Michael Eaude, Catalonia Today

"Elliott’s comparative study of the political trajectories of Scotland and Catalonia from the end of the ﬁfteenth century to the present day is both extremely useful and highly successful."—Jordi Larios, Journal of Interdisciplinary History

"J. H. Elliott is a superb guide through the complexities of Catalan and Scottish history. With a deft touch and lucid prose he fully demonstrates the great value of historical comparison for understanding present conditions in both societies."—Professor Emeritus Sir Tom Devine, University of Edinburgh

"Rarely has a work of comparative history been so timely and newsworthy. J.H. Elliott’s learned comparative study of the long-term trajectories of Scotland and Catalonia is a reliable guide to the current travails of the nation-state in Western Europe. Elliott cogently explains the background to the phoenix-like revival of long-submerged historic nations within both the UK and Spain."—Colin Kidd, author of Union and Unionisms: Political Thought in Scotland 1500-2000 and British Identities before Nationalism: Ethnicity and Nationhood in the British Atlantic World, 1600-1800

"An excellent, detailed, properly comparative study that foregrounds the importance of dialogue and mutual understanding in modern constitutionalism."—Murray Pittock, University of Glasgow

"J.H. Elliott’s new book offers a deeply considered and timely perspective on the attempts of the Scottish and Catalan nationalist movements to secure independence. Written with all his customary elegance and incisiveness, it is authoritative in its historical assessments and notably fair-minded in its examination of controversial issues. Scots and Catalans provides the essential starting point for anyone who wishes to understand the problems currently besetting both London and Madrid on their northern periphery."—Professor Hamish Scott, FBA, All Souls College, Oxford.

"The similarities and contrasts between Scotland and Catalonia throw many fundamental aspects of Scottish history into sharp relief. The result is not only a masterful exercise is comparative history. It is also a compelling account of British history from a Scottish perspective, and a superb introduction to Scottish history itself."—Dauvit Brown

J. H. Elliott is Regius Professor Emeritus of Modern History at Oxford University. He was knighted for his services to history and has been honored by the Spanish government. He won the Balzan Prize for his publications on European history and the Francis Parkman Prize for Empires of the Atlantic World.
Loading...
or
Not Currently Available for Direct Purchase