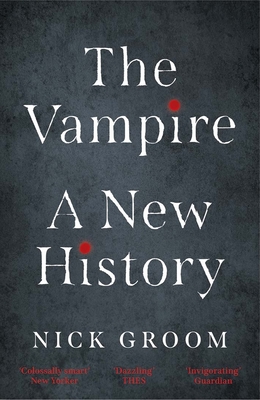 An authoritative new history of the vampire, two hundred years after it first appeared on the literary scene

Published to mark the bicentenary of John Polidori’s publication of The Vampyre, Nick Groom’s detailed new account illuminates the complex history of the iconic creature. The vampire first came to public prominence in the early eighteenth century, when Enlightenment science collided with Eastern European folklore and apparently verified outbreaks of vampirism, capturing the attention of medical researchers, political commentators, social theorists, theologians, and philosophers. Groom accordingly traces the vampire from its role as a monster embodying humankind’s fears, to that of an unlikely hero for the marginalized and excluded in the twenty-first century.

Drawing on literary and artistic representations, as well as medical, forensic, empirical, and sociopolitical perspectives, this rich and eerie history presents the vampire as a strikingly complex being that has been used to express the traumas and contradictions of the human condition.

Praise For The Vampire: A New History…

"An authoritative take on the history of the vampire."—New York Times Book Review

"Nick Groom concludes this invigorating study of vampires by suggesting that we should try to be a bit more like them. Thankfully this doesn’t entail hanging shiftily around blood donor banks . . . Rather, Groom wants us to think about vampires as a way of re-enchanting the contemporary human condition."—Kathryn Hughes, Guardian (Book of the Day)

‘Colossally smart. . . Groom is interested in undead Byron, but he is more interested in the aspects of vampirology that pop culture tends to neglect. . . It is a great relief to meet Groom’s vampire, still icy from the void and unburdened by the aesthetic of Gothic nightingale-lite. When it materializes, on the threshold of a worrisome dream, it looks nothing like what one expected. . ."—Katy Waldman, New Yorker

“There are plenty of fiction and nonfiction titles about vampires out there for fans of the Dracula legend, but few cover as much ground as Nick Groom's upcoming book, The Vampire. Out this October, this thoroughly researched history of one of horror's most iconic creatures explores the legend through the lenses of art, literature, medicine, culture, religion, and so much more.”—Sadie Trombetta, Bustle.com

“We all know about Dracula, yet Bram Stoker's masterpiece represents the culmination of what Nick Groom - an academic sometimes known as the 'Prof of Goth' - calls 'the preceding two centuries of vampirology.' In this dazzling history, he traces its trajectory, drawing on 'evidence from theological treatises to medical reports, travelogues to political allegories, and poetry and fiction to occult tractates,' and reveals why the vampire 'can challenge us today as powerfully as it has done for nearly three centuries.' Touching on some of our deepest feelings about blood, gender, race, science and society, vampires, quite simply, are 'good to think with.'”—Times Higher Education

“The Vampire would be an excellent choice for a course on gothic literature or any aspect of monsters and the monstrous. But, it could also be surprisingly useful for a course on religion and science due to Groom’s exploration of vampires as liminal beings that shift between these two discourses. Above all, this is an enjoyable book for demonstrating that, after all these centuries, there is still more to be said about vampires.”—Joseph P. Laycock, Nova Religio

“In this erudite and engaging history of the vampire Nick Groom explores the blood sucker’s journey through the European Enlightenment and beyond, illuminating broader aspects of religion, medicine and culture on the way. In doing so, Groom provides us with a valuable prehistory of the literary Dracula.”—Owen Davies, author of Grimoires

“Groom succeeds in contextualising the vampire thoroughly, for the first time, in the changing cultures of two hundred years of European history: a remarkable achievement.”—Ronald Hutton, author of The Witch

“Likely to be the definitive history of the vampire for years to come. In an accessible yet deeply scholarly dive into the archives of medicine, folk-lore, travel writing, theology, politics and literature, Groom produces a compelling account of the vampire as the product of the Enlightenment’s clash with its superstitious Eastern other from the seventeenth century onwards. A blood feast that will sustain every kind of vampirologist, from teen Goth up to Professor Van Helsing.”—Roger Luckhurst, author of Zombies

"Our centuries-long fascination with the living dead is given a fresh and welcome consideration by Nick Groom, who mines historical reality—and unreality—with a keen appreciation of cultural meaning and metaphor."—David J. Skal, author of Something in the Blood

Nick Groom, known as the “Prof of Goth,” is professor of literature in English at the University of Macao.
Loading...
or support indie stores by buying on