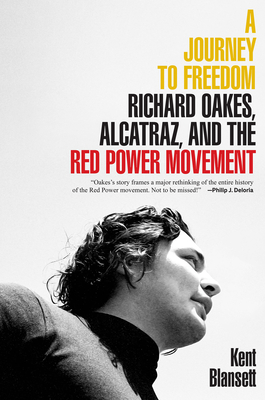 A Journey to Freedom (Paperback)

The first book-length biography of Richard Oakes, a Red Power activist of the 1960s who was a leader in the Alcatraz takeover and the Indigenous rights movement

A revealing portrait of Richard Oakes, the brilliant, charismatic Native American leader who was instrumental in the takeovers of Alcatraz, Fort Lawton, and Pit River and whose assassination in 1972 galvanized the Trail of Broken Treaties march on Washington, D.C. The life of this pivotal Akwesasne Mohawk activist is explored in an important new biography based on extensive archival research and interviews with key activists and family members.

Historian Kent Blansett offers a transformative and new perspective on the Red Power movement of the turbulent 1960s and the dynamic figure who helped to organize and champion it, telling the full story of Oakes’s life, his fight for Native American self-determination, and his tragic, untimely death. This invaluable history chronicles the mid-twentieth-century rise of Intertribalism, Indian Cities, and a national political awakening that continues to shape Indigenous politics and activism to this day.

Kent Blansett, a Cherokee, Creek, Choctaw, Shawnee, and Potawatomi descendant, is associate professor of Indigenous studies and history at the University of Kansas.

Praise For A Journey to Freedom: Richard Oakes, Alcatraz, and the Red Power Movement (The Henry Roe Cloud Series on American Indians and Modernity)…

“Blansett’s meticulous research pays due respect to Oakes’ massive contribution to the Red Power movement but avoids the hubris of hagiography by understanding Oakes as a flawed individual who could be polarizing and difficult . . . Blansett’s balanced writing combines with copious photos and maps that bring the story to life.”—Dina Gilio-Whitaker, Los Angeles Times
“A Journey to Freedom will engage readers in Native communities and in college and university classrooms, and casual readers will also find themselves avidly turning the page to see what comes next.”—Laurie Arnold, The Sixties
"A Journey to Freedom is the nonfiction complement to Tommy Orange’s best-selling novel There There (2018) . . . an exemplary work that recovers an important period in modern California history and casts it in a new, richer light.”—Randall A. Lake, California History
“This thorough and balanced account places [Richard Oakes’] life within the broader framework of Indian affairs stretching from WW I through the termination and relocation policies of the 1950s. Likewise, the book corrects many long-held misunderstandings about the birth of the Red Power movement and its sometimes adversarial participants. “—Choice
“This scholarly yet reader-friendly text will enlighten readers about an often-overlooked part of a continuing civil rights struggle.”—Publishers Weekly
"Published on the eve of the fiftieth anniversary of the 1969 takeover of Alcatraz Island, this text is as timely as it is necessary . . . Blansett creates a masterful biography of one of the most important figures of the Red Power movement."—Paul McKenzie Jones, Western Historical Quarterly, Summer 2000
"A Journey to Freedom makes for an engaging read that can appeal to a broad audience . . . This study thus solidly roots [Richard] Oakes in a history of American Indian activism in the modern period . . . which includes contributing to the development of Native American Studies programs, shifting the course of American Indian activism, and influencing federal policy reforms toward self-determination . . . Oakes became a spokesperson, leader, and symbol for Red Power . . . "—Nicholas G. Rosenthal, Reviews in American History, March 2020
“Writing from the heart, Kent Blansett demonstrates the sui generis leadership of Richard Oakes in the big picture of Native nationalism that rocked federal-Indian relations and captured public attention in the quest for sovereignty.”—Donald L. Fixico, author of Call for Change:  The Medicine Way of American Indian History, Ethos, and Reality
"In this exhaustively researched and brilliant work, Kent Blansett centers the story on Mohawk leader Richard Oakes. A Journey to Freedom is a powerfully told and richly documented biography of one of Indian Country’s most important leaders and contributes to our understanding of the Red Power Movement, the occupation of Alcatraz Island, Native American activism in the twentieth century, and the urban Indian experience."—Amy Lonetree, author of Decolonizing Museums: Representing Native America in National and Tribal Museums
"Kent Blansett’s deeply researched and well-told biography reveals the centrality of tribal nationalism in Intertribal organizing. Richard Oakes’s story frames a major rethinking of the entire history of the Red Power movement. Not to be missed!"—Philip J. Deloria, author of Playing Indian