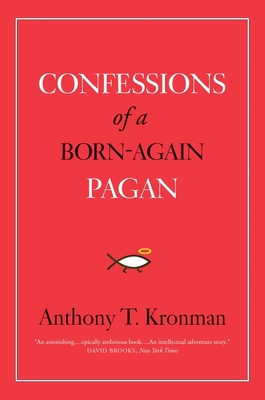 Confessions of a Born-Again Pagan (Paperback)

In this passionate and searching book, Anthony Kronman offers a third way—beyond atheism and religion—to the God of the modern world

“An astonishing, . . . epically ambitious book. . . . An intellectual adventure story based on the notion that ideas drive history, and that to dedicate yourself to them is to live a bigger, more intense life.”—David Brooks, New York Times
We live in an age of disenchantment. The number of self-professed “atheists” continues to grow. Yet many still feel an intense spiritual longing for a connection to what Aristotle called the “eternal and divine.” For those who do, but demand a God that is compatible with their modern ideals, a new theology is required. This is what Anthony Kronman offers here, in a book that leads its readers away from the inscrutable Creator of the Abrahamic religions toward a God whose inexhaustible and everlasting presence is that of the world itself. Kronman defends an ancient conception of God, deepened and transformed by Christian belief—the born-again paganism on which modern science, art, and politics all vitally depend. Brilliantly surveying centuries of Western thought—from Plato to Augustine, Aquinas, and Kant, from Spinoza to Nietzsche, Darwin, and Freud—Kronman recovers and reclaims the God we need today.

Anthony T. Kronman served as dean of the Yale Law School from 1994 to 2004. He currently divides his time between the Law School and the Directed Studies Program in Yale College. He is the author of Education’s End: Why Our Colleges and Universities Have Given Up on the Meaning of Life and The Assault on American Excellence..

Praise For Confessions of a Born-Again Pagan…

"An astonishing, . . . epically ambitious book. . . . An intellectual adventure story based on the notion that ideas drive history, and that to dedicate yourself to them is to live a bigger, more intense life."—David Brooks, New York Times
"The book diligently provides . . . an intellectual history of neo-paganism and a commendable attempt at navigating the practical ethics of what a post-Christian society would look like."—Publishers Weekly
"Impressive and thought provoking."—Choice​
"Classical theists, atheists, and agnostics alike would be foolish not to take seriously the complex argument of this immensely erudite, rigorous, and readable essay in 'pagan theology.'"—Miroslav Volf, author of Flourishing: Why We Need Religion in a Globalized World
"Confessions of a Born-Again Pagan is a monumental and profound achievement in re-enchanting the world by embracing the religious sensibility of such ‘heretics’ as Spinoza and Nietzsche. But the book is also a re-enchantment of philosophy. With immense erudition Kronman has restored philosophy to its classical role of addressing the innermost concerns of human existence and humanity’s ongoing struggle to reconcile itself with the world."—Moshe Halbertal, author of Maimonides: Life and Thought

"An extraordinary work of scholarship. There is no comparable work of such universal ambition and theological depth."—José Casanova, Georgetown University

"Anthony Kronman’s Confessions of a Born-Again Pagan is a big book about the largest of themes—theology and philosophy, science and psychology, ethics and politics, friendship and art. It is above all an attempt to work out a coherent and attractive theology suited to the modern world. It takes up questions of the deepest human importance and is beautifully written. A rich and ambitious work.”—Michael J. Sandel, author of What Money Can't Buy: The Moral Limits of Markets